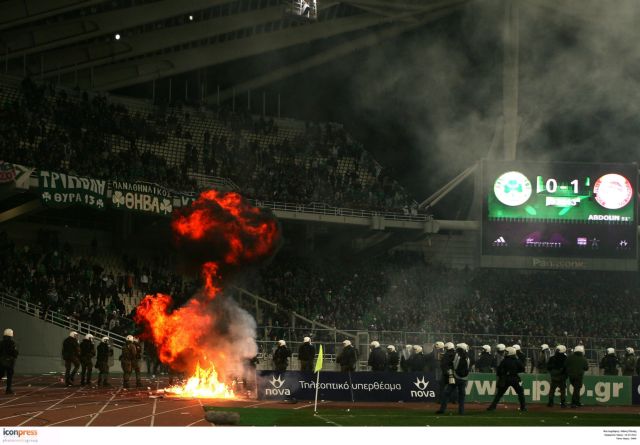 The recent instances of football-related violence have prompted a series of debates within the government in an effort to take the necessary measures to stamp out violence and corruption from the sport.

A broad discussion is scheduled for 11am at the Prime Minister’s office, where the Ministers of Interior, Administrative Reform, Justice and the State are to attend. The Deputy Minister of Sport Stavros Kontonis will then meet with football officials at 3pm.

The Super League was indefinitely suspended last week, so today’s meetings will determine whether the top-tier domestic football championship will resume this weekend.

On Tuesday Mr. Kontonis met with the owners of the country’s biggest clubs, Olympiacos and Panathinaikos – Mr. Marinakis and Mr. Alafouzos respectively – and it appears that an agreement was reached that will allow the Super League to resume this weekend.

Nevertheless, Mr. Kontonis is said to be expecting written proposals and commitments by the Super League that will effectively address the violence and has seemingly requested the PM’s consent so that the championship can resume.

Meeting with UEFA’s Platini and FIFA officials on Monday

A delegation from the General Secretariat of Sport, headed by Mr. Kontonis, will travel to Geneva on Monday, where they will meet UEFA President Michel Platini and FIFA representatives, in order to discuss matters related to Greek football, according to the Ministry’s announcement.