The planned demolition of a Roma camp in Halandri has prompted a demonstration from the local residents, who have been living… 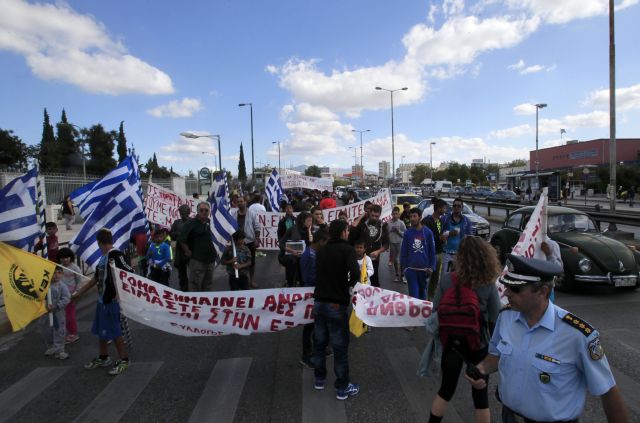 The planned demolition of a Roma camp in Halandri has prompted a demonstration from the local residents, who have been living in the area for about forty years. The protesters have set up a road block, set fire to tires and blocked the bus lane on Mesogion Avenue towards Athens. The courts are expected to rule on the appeal launched against their transfer later in the day.

The Roma gypsies are reacting to the decision to transfer them from their camp in Halandri to an area on Mount Patera, near Megara. This new location however is at an altitude of 750 meters on the mountain, where the temperature are low. Furthermore there are no schools nearby or any essential amenities, such as a water or energy network.

The Mayor of Halandri Simos Roussos spoke to Vima 99.5 FM and stressed that the new location is “totally inadequate and unprepared to welcome the Halandri Roma families, which include many children and elderly”. Mr. Roussos argued that it is imperative that the camp demolition and relocation must be postponed until a viable solution can be found, which will comply with Greek and international legislation.

Furthermore, the government spokeswoman claimed that the Roma gypsies have occupied private property and accused the main opposition party SYRIZA of supporting them “because they are looking for a source of lawlessness”.

Relocation suspended, demolition to go ahead

After a meeting that was held at the local Police Department in Halandri, it was decided that the relocation of the camp’s residents would be suspended, while the planned demolition of 12 buildings will go ahead. Negotiations on the matter are continuing.

Present at the meeting are the Deputy Regional Governor of Attica Giorgos Karameros, the General Secretary of Decentralized Administration Manolis Angelakas, the Mayor of Halandri Simos Rousos, the president of the Roma camp Stelios Kalamiotis and a prosecutor, who was tasked to overlook the relocation. The Mayor and General Secretary have argued against police intervention until a solution is found.

The Decentralized Administration services intend to demolish 12 of the 67 buildings on site claiming are uninhabited, which is disputed by the camp’s residents. The claims of the camp’s residents are corroborated by data collected by the Roma Education Program of the University of Athens, which indicate that 80 families live on site and about 50 children attend local schools.