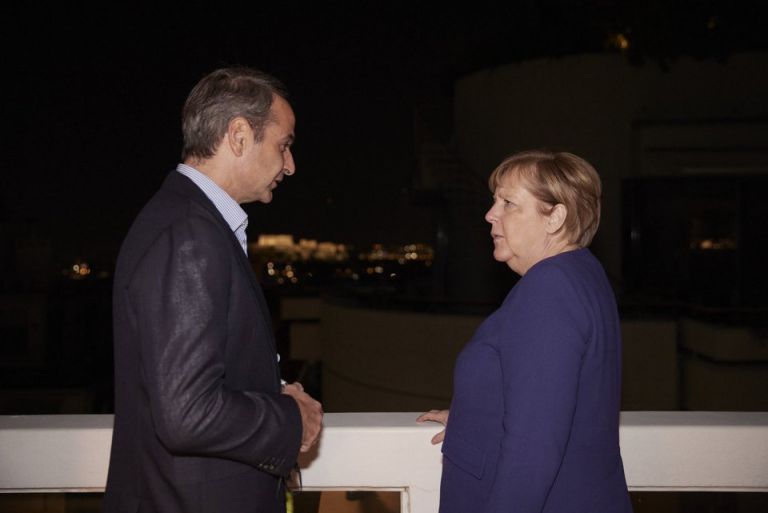 The bitter clashes of the past over harsh austerity imposed on Greece by Berlin is water under the bridge, and Greek-German relations have been at a very good level for the last six years, especially in the post-memorandum era and certainly on Mitsotakis’ watch.

Outgoing German Chancellor Angela Merkel arrived in Athens this evening for a visit that government sources say is “highly symbolic” and an opportunity to take stock of Greek-German relations.

She dined this evening at the Athens residence of Prime Minister Kyriakos Mitsotakis and will hold formal talks tomorrow with both President Katerina Sakellaropoulou and the PM.

The visit comes 11 years after Greece entered its first bailout programme and three years after it exited its last one.

In her recent speech to the Bundestag, which offered an accounting of her 16-year term in office, Merkel declared that the severe austerity she imposed on Athens – when she “asked so much of the Greeks” as she said -was the toughest moment in her long tenure.

That was not, as many in Greece interpreted it, an expression of remorse, but rather a confession that it was her most gruelling decision as chancellor, and during the crisis she repeatedly acknowledged the pain of the Greek people while remaining steadfast in her policy.

That  harsh austerity made the German chancellor (and her finance minister, Wolfang Schaeuble, who at one point put a possible Grexit on the table in talks with Greece), by far the most detested foreign leader in Greece, and few at the time acknowledged that she played a pivotal role in saving the country, albeit at a very high price, from a disastrous disorderly bankruptcy.

All Greek leaders who when in the opposition unleashed scathing criticism of Merkel, when they came to power very soon did an about-face.

Former conservative New Democracy PM Antonis Samaras, who had severely criticised the chancellor and her policies, when he came to power told a joint 2012 news conference in Berlin regarding his former, stauch anti-memorandum stance that, “No one is without sin.”

More famously, SYRIZA leader Alexis Tsipras while in the opposition in 2014 declared in a speech, “Go back Madam Merkel, Go back Mr. Schaeuble”. Famous last words.

When he rose to power in 2015 and after a dramatic six months that led to a clash with creditors and Germany that many say brought the country to the verge of Grexit, Tsipras not only reversed the negative outcome of a referendum that he called on the last bailout memorandum, but later developed a very cordial and constructive relationship with the German chancellor. The dread Madam Merkel had become his new friend Angela.

All that is water under the bridge, and Greek-German relations have been at a very good level for the last six years, especially in the post-memorandum era and certainly on Mitsotakis’ watch.

The agenda for talks tomorrow includes all of Athens’ top foreign policy concerns, from Ankara’s turbulent relations with Athens, Cyprus, and the EU to the migration issue, Libya and the illegal Turkey-Libya MoU delimiting their EEZs (maritime zones) at the expense of Greece’s, and the Greece-Egypt electricity link-up. The economy in the framework of the European Pandemic Recovery and the loosening of fiscal discipline, unclear for how long, will also be on the agenda.

Angela Merkel has long been deeply involved in all of these issues. In March, 2021, Merkel contacted Turkish President Recep Tayyip Erdogan and, as government spokesman Steffen Seibert said at the time, the discussion concerned Greek-Turkish relations, the Cyprus problem which was to be discussed in a five-way meeting in Geneva (which ended in deadlock), and EU-Turkey relations.

Seibert quoted Merkel as saying at the time that, “Only through dialogue and based on international law can disputed issues be resolved in the Eastern Mediterranean.”

Indeed, she has pushed hard for the continuation of that dialogue in the interim, and will undoubtedly do so tomorrow.

A key objective of both Berlin and the EU more broadly is not to allow Turkey’s extremely tense relations with Cyprus and Greece to undermine EU-Turkey relations.

In a statement issued prior to Merkel’s arrival, Seibert said that the German government’s steadfast view is that problems can be resolved “only with dialogue and in a spirit of mutual respect”.

“It is our conviction – based on which the federal government always acts – that good neighbourly relations between Greece and Turkey are important and in the interest not only of the two countries but also of Europe in its entirety. That is why we welcome and support the fact that Greece and Turkey have resumed exploratory talks, in order to find solutions to difficult pending issues,” Seibert said, noting that Merkel made that clear in talks she held in Turkey recently.