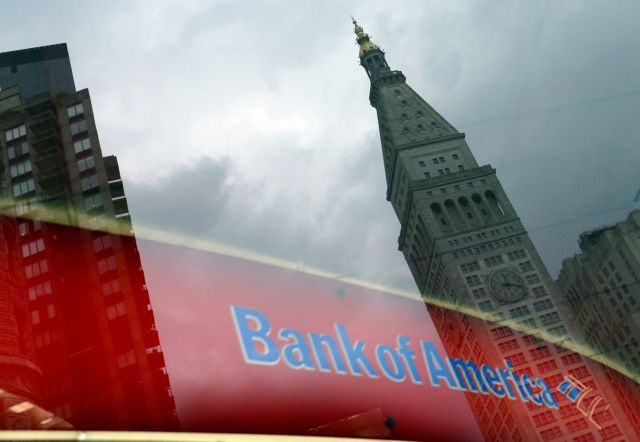 epa03413883 A building is reflected in the window of a Bank of America branch in New York City, New York, USA, 28 September 2012. Bank of America agreed to pay 2.43 billion US dollars to settle claims that it misled investors in its 2009 acquisition of Merrill Lynch & Co. EPA/ANDREW GOMBERT
Share

Prime Minister Alexis Tsipras will travel to New York on 23 September, where he will hold a series of high-level bilateral and multilateral talks on the sidelines of the UN General Assembly.

A key focus of the trip will be to lure prospective investment in talks with major institutional investors. In that context, working breakfasts have been arranged with executives of the Bank of America, Merrill Lynch, and Morgan Stanley, as well as meetings with representatives of large investment groups and capital management funds.
There will also be talks with prospective Greek-American investors.

“The prime minister’s presence in New York and his contacts will be a continuation of the impetus offered by the fact that the US was the honoured country at this year’s Thessaloniki International Fair. The participation of large, well-known companies and US support sent a positive message about Greece to the markets, regarding both reforms and the prospects of the Greek economy,” a diplomatic source said on background.

The PM will also participate in the Concordia Annual Summit, which aims to build successful public-private partnerships.

Foreign ministry sources say that the exit from the bailout memorandums creates an enhanced dynamic and interest in the prospects of the Greek economy, and that the Greece-FYROM naming agreement bolsters recognition of Greece’s role as an agent of regional stability and growth.

Tsipras will address the 73rd UN General Assembly’s (UNSG) Nelson Mandela Peace Summit on 24 September. On that evening, he will attend a reception hosted by US President Donald Trump in honour of the heads of delegations to the UNSG.

Tsipras will meet with UN Secretary General Antonio Guterres, and efforts to jumpstart Cyprus settlement talks and regional geopolitical developments are expected to be high on the agenda.
A possible bilateral meeting with Turkish President Recep Tayyip Erdogan has yet to be confirmed.