The erratic minister and the Constitution

Defence Minister Panos Kammenos said that his Independent Greeks party, the junior coalition partner, will withdraw its trust in the government if the Greece-FYROM naming accord is tabled in the Greek parliament for ratification 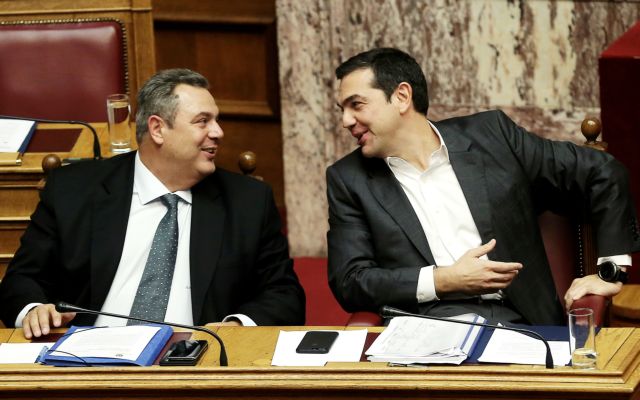 He has surpassed every limit of ridiculousness, unsteadiness, and political inconsistency, but the prime minister continues to tolerate him, and even to praise the consistency of his views.

In the umpteenth reversal regarding the FYROM naming issue, Defence Minister Panos Kammenos said that his Independent Greeks party, the junior coalition partner, will withdraw its trust in the government if the Greece-FYROM naming accord is tabled in the Greek parliament for ratification.

In another demonstration of his lack of seriousness, he said that there is no agreement with Skopje, but that the accord was simply initialed by the two countries’ foreign ministers.

He obviously did not see PM Alexis Tsipras and FYROM’s PM, Zoran Zaev, celebrating, nor did he hear the repeated supportive statements of government cadres, nor did he read the text of the accord.

The leader of the Independent Greeks party can demean himself as much as he likes, with talk of a Greek referendum on the accord or of a non-existent agreement. That is how he is, and he is not about to change.

Yet, there is a major issue that confronts the government, and the prime minister himself. It is perhaps to be expected that the defence minister has not read the Greek Constitution, which clearly states the responsibilities of the prime minister and ministers. Were he to read it, he would see that it states clearly that, “The Prime Minister ensures the unity of the government and directs its actions.”

It also states that, “The members of the cabinet and deputy ministers collectively, are responsible for the general policy of the government, and each of them is accountable for their actions or omissions related to their competency.”

Of what kind of governmental unity and collective responsibility can one speak when one of the basic pillars of the government is playing the madman? The situation resembles a political café, where everyone can say whatever they want, and everyone else, including the prime minister, looks the other way.

As understandable as the effort to maintain a narrow and incongruous governmental alliance may be, the problematic and constant effort to ignore or downgrade the defence minister’s claptrap, which is designed to boost his very low numbers in opinion polls, is equally incomprehensible and problematic.