‘Rights, liberties, and collective action, which gave workers the ability to negotiate with employers, were abolished,’ the PM said about the bailout era. 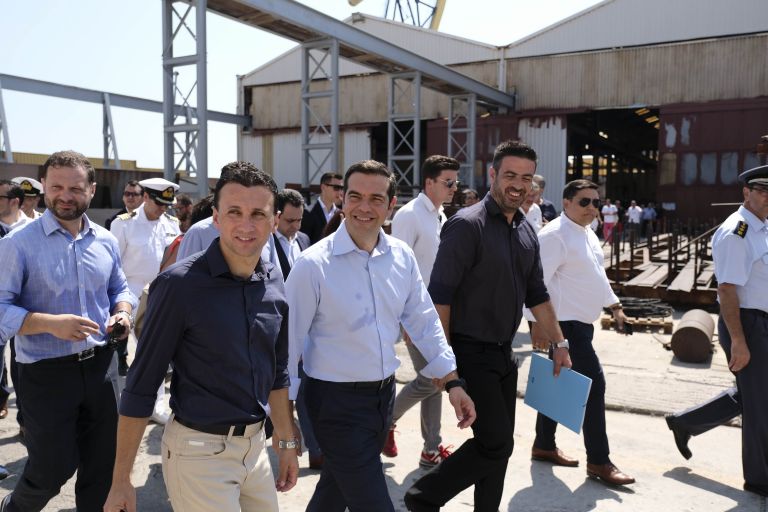 Share
Prime Minister Alexis Tsipras used a visit to the Neorio shipyard, on the island of Syros, to declare that job creation is a top priority for his government.
“The wager of the post-bailout era is not simply to return the country to normalcy, but to win the battle on the labour front,” Tsipras told an audience of shipyard workers in Neorio.
“During the years of the memorandum, the people of work and toil suffered more than anyone. Labour became the only “merchandise” which creditors did not allow the seller – workers – to freely negotiate the price,” the PM said.
“Collective bargaining contracts were abolished. Workers found themselves in a labour jungle. Insecurity, the violence of layoffs, the terrorising of the working class by using the huge army of the unemployed as leverage against it, which were all brought on by the memorandum, pushed wages down. Rights, liberties, and collective action, which gave workers the ability to negotiate with employers, were abolished. So called “social automatism” (turning one social class against another) became a tool for the annihilation of labour,” Tsipras said.
“The definitive shutdown of the Neorio shipyard would be a blow to all citizens of Syros. Today, I can say with certainly that we are far from that eventuality. Already, 300 workers have returned to their jobs and debts have been settled – and that is just the beginning,” the PM said.

“We, as a state, chose the path of responsibility. We did not play the role of a Pontius Pilate. We will do everything in our power so that Neorio can become one of the biggest shipyards in the country, and so that it can employ 1,000 workers over the next three years,” he concluded.