Mitsotakis said that there were important operational mistakes, and that the main concern of the government was the communications management of the tragedy, and not substantially informing citizens. 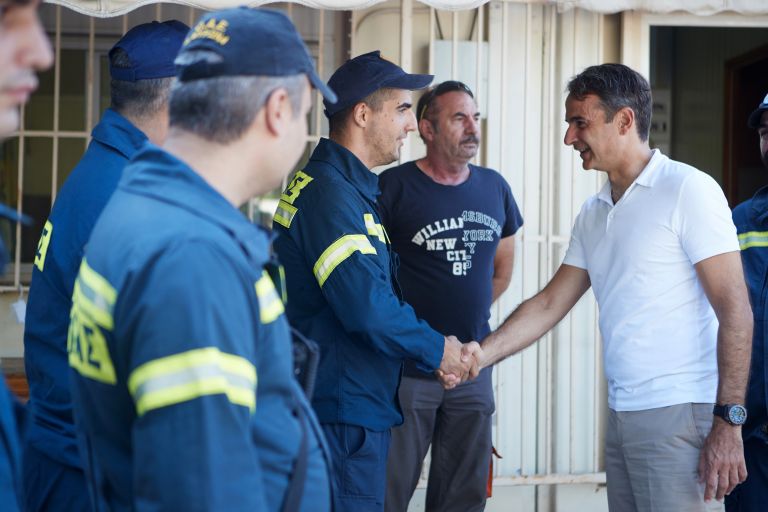 Share
On a visit to a fire prevention station in Vyronas, Athens, New Democracy leader Kyriakos Mitsotakis unleashed an attack against the government over its handling of the wildfire tragedy.
Mitsotakis said that there were important operational mistakes, and that the main concern of the government was the communications management of the tragedy, and not substantially informing citizens.
This is the third time over the last few years that Mitsotakis visited fire protection facilities near Hymettus Mountain in Athens.
Today, Mitsotakis met with volunteer firefighters and congratulated them for their work, and their valuable social and environmental contribution. The volunteers briefed him on their activities, their training, and the most important problems they face.
Mitsotakis said that one must protect at all costs whatever remains of the forests of Hymettus, Parnitha, and Penteli, both because they are very near populated areas, and because of their particular environmental value.
He said that forests near urban areas require special fire protection plans, in cooperation with all local organisations and municipalities.
Mitsotakis had already underlined the need for special plans and bold interventions in the forests of Attica in 2007, when he was president of parliament’s Environmental Committee.
He said the contribution of volunteer firefighters is crucial in protecting forests near urban areas, and asserted there should be incentives to attract more volunteer firefighters, and to bolster their coordination and organisation.
Some of the volunteer firefighters helped in efforts to put out the fire in Mati, and they related their experiences.

Mitsotakis stressed the importance of prevention, and said that New Democracy’s plan includes a new civil protection framework, which can ensure better coordination and operational effectiveness.