Mati: Chaos with police communications after the fire

The dialogues through wireless systems reveal that policemen essentially did not know what they were doing, and they were confronted by the flames that swiftly reached the beach. 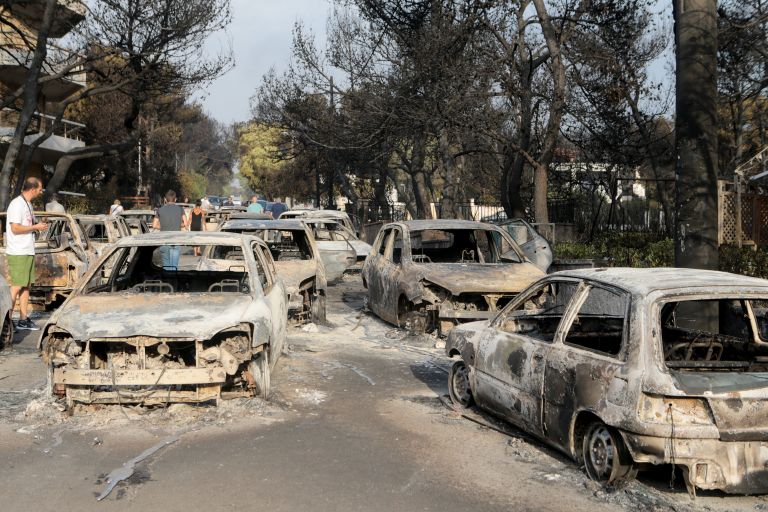 Share
Absolute chaos prevailed between police forces at Mati when the fire was flaring up and crossing Marathonos Avenue.
The dialogues through wireless systems reveal that policemen essentially did not know what they were doing, and they were confronted by the flames that swiftly reached the beach.
At 18:12, the fire reaches Marathonos Avenue and an order to set up a detour was issued.
18:13 “You need to come further down, as a detour will be necessary. Start coming to Nea Makri, come to Nea Makri.”
That order was given to a patrol car and a motorcycle. Five minutes later, something dramatic was ascertained.
18:18 “The fire reached Kyani Akti. There is a station (patrol car) there to cut off the traffic.”
It is already clear that the fire front had reached the beach, while the fire service is trying to cut off traffic on Marathonos Avenue. That observation seems to have led those in charge to issue the next order:

18:29 “Go to Kokkino Limanaki and do not let anything go from the coastal road to Nea Makri.

Already some cars, due to the fact that traffic was cut off on Marathonos, had chosen that coastal route. It is a crucial moment, as it seemed that the fire had enveloped the area.
In the next wireless communication one hears:
18:29 “No vehicle should move on the coastal road. We must cut off traffic at Kokkino Limanaki and direct them all to Rafina.”
This tragic observation shows that the fire had reached the sea. Five minutes later there is a wireless communication that a patrol car has been trapped.
18:35 “Whatever stations (traffic patrol cars) are moving or are in the fire area should be careful not to be trapped. There should be no automobile on the coastal road and there must be strict detours. There is a serious problem.”

From that moment, everything was lost. Citizens were trapped in the narrow roads. Some burned on the spot, and others ran to be saved but the fire caught up with them. Others fell into the sea.