FYROM-Greece accord: The rough road to implementation

While Athens has set terms for agreeing to FYROM joining Nato and the EU after a yes vote in a planned referendum in Skopje and a constitutional revision there, it will be in a very tough spot if FYROM meets all its obligations and Greece does not. 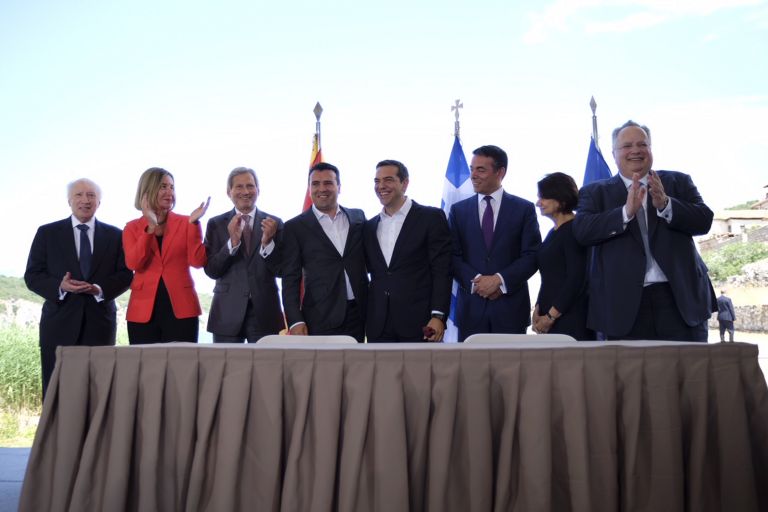 Share
Athens and Skopje celebrated the signing of the FYROM naming agreement, but on the sidelines there are many – at the foreign ministry and in the opposition – who avoid the grandiose statements of Foreign Minister Nikos Kotzias.
The accord was certainly a painful compromise. Athens undertook weighty commitments that will be difficult to avoid in the future and for which it will be called to account. That will become obvious if in the step-by-step approach something is not implemented, especially if the Greek parliament does not ratify the accord after FYROM fulfils its part of the bargain.
Letters to Nato, Brussels
Sources say that Athens today is poised to officially send letters to Nato and the EU, which will inform them that following ratification of the accord by Skopje, and that Greece recognises that there is no problem with FYROM commencing accession talks with the two organisations.
Kotzias on 14 June already sent a letter to Nato Secretary General Jens Stoltenberg informing him of the agreement and the steps that must be followed from now on. The crucial point is that the issuance of an invitation for talks does not lead automatically the final accession to the Alliance.
Legal theories and ‘grey zones’
Experts say that the key grey zone is not recognition of a Macedonian nationality and language, but rather what happens if the Greek parliament does not ratify the accord, and whether FYROM can then take Greece to the International Court of Justice in The Hague. While Athens has set terms for agreeing to FYROM joining Nato and the EU after a yes vote in a planned referendum in Skopje and a constitutional revision there, it will be in a very tough spot if FYROM meets all its obligations and Greece does not.
On the sidelines, there is a clash between two legal views of the situation. The one, held by Oxford University international law professor Antonis Tzanakopoulos, who advised Kotzias, says that Greece has not assumed any commitment in the accord beyond a good faith effort to meet the terms that will put it into effect.
The other view says that the very signing of the accord directly produces legal results and binds Greece to a series of actions, which it may not be able to avoid if current conditions change, and which may have legal repercussions. Government sources recognise that danger.
Fragile situation in FYROM

The situation in FYROM remains fragile. The Zaev government and parliament immediately ratified the accord.

The dispute between the government on the one hand, and main opposition VMRO-DPMNE and President Ivanov on the other hand, is deep. VMRO denounced the agreement and walked out on the parliamentary ratification debate, allowing the government to conclude the debate in two days. The agreement was approved with 69 yeas and no nays, and the ruling party gained the votes of two more MPs than it had before.
The question in Skopje is what the stance of the main opposition will be in a referendum, whether it will campaign against approval or boycott the process, which would raise question on the legitimacy of the referendum.
Another question is whether Zaev will call snap elections along with the referendum, in order to rally his base in favour of the agreement.