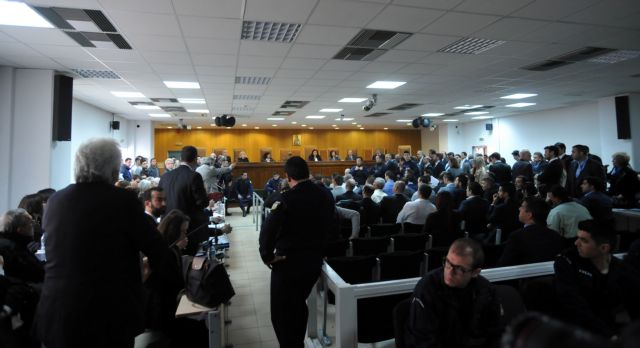 The Golden Dawn trial continued on Wednesday, with defendant Ioannis Kazantzoglou terrorizing witness Dimitra Zorzou as she identified him as being present and participating in the murder of anti-fascist activist and rapper Pavlos Fyssas. During questioning Zorzou told the court how Kazantzoglou was in the car with the self-confessed murdered Giorgos Roupakias and attempted to remove the police officer who was arresting the murderer.

The witness stated that while a group of about twelve people were attacking Fyssas and two other, a car arrived and the driver (Roupakias) left it in the middle of the street. At that point only two or three of those attacking Fyssas remained, with the rest leaving. She then explained that Roupakias calmly approached Fyssas and hugged him without saying a word and making a couple motions with his hand, before returning to the car.

At that a DIAS police motorcycle arrived and Fyssas yelled to arrest the driver who stabbed him. The passenger in the car – Kazantzoglou, attempted to stop the police officer who proceeded to arrest Roupakias. The witness argued that she recognized him and pointed him out in the courtroom, at which point Kazantzoglou threatened her.

She also stated that after her name was publicized she has received anonymous telephone calls and has felt threatened. Later on Zorzou told the court that after his arrest Roupakias was walking alone, unaccompanied in the police station. She also estimated that the attack against Fyssas had been planned and argued that Golden Dawn is a neo-Nazi party.