A powerful explosion took place at about 3:35 in the early hours on Tuesday, at the offices of the Hellenic Federation of Enterprises… 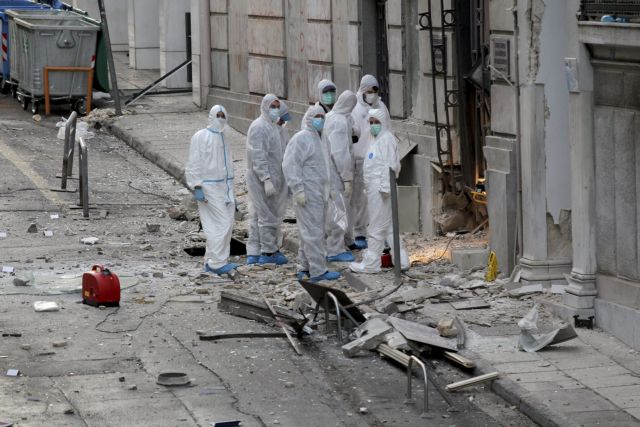 A powerful explosion took place at about 3:35 in the early hours on Tuesday, at the offices of the Hellenic Federation of Enterprises (SEV) on Xenofontos Street on Syntagma Square. The explosion mostly damaged the office entrance, as well as nearby buildings, such as the Amalia hotel.

A warning phone call was made to the Lambrakis Press Group and the Efimerida ton Syntakton newspaper between 2:50 and 2:55. The caller, who altered his or her voice, stated that a bomb would go ff at the SEV offices and that it was not a prank. No references to any organizations or groups were made.

The Police promptly cordoned off the area until the bomb disposal unit and counter-terrorism police units arrived. According to reports the time bomb was placed in a bag.

At present the police suspect that the bomb attack against SEV is related to the austerity measures which the government has been forced to pass through Parliament. There was also a recent call by imprisoned anarchist Nikos Romanos for an escalation of actions for a ‘black December’.

In any case though the authorities have ruled out the possibility of the attack being related to jihadist terrorism or the attacks in Paris, stressing that the attack has all the hallmarks of a domestic militant group. In 2010 the “Zero Tolerance” militant group carried out an arson attack against the SEV offices. So far no group has claimed Tuesday’s bomb attack.