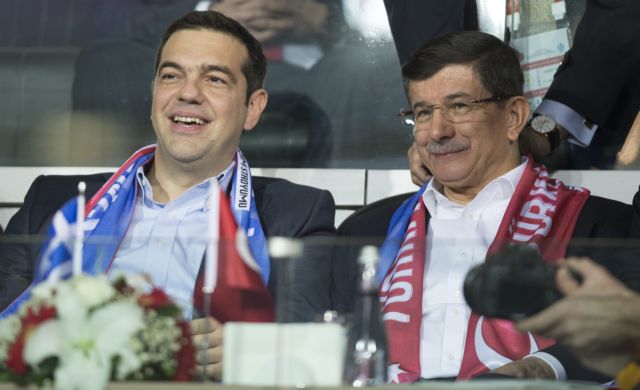 The official visit of Greek Prime Minister Alexis Tsipras to Turkey and his meetings with Turkish officials comes amid the recent terrorist attacks in Paris and the G20 meeting in Antalya. In his meetings with Turkish officials, the Greek PM is expected to suggest the establishment of hotspots in Turkey and joint efforts to tackle human traffickers.

In the press conference that followed the meeting between the two Prime Ministers, Mr. Davutoglu underlined the importance of further developing ties between the two countries, particularly in tourism, trade and energy. The Turkish PM noted that there have been problems in the past regarding the Cypriot dispute, but stressed that the talks will continue.

Later on Mr. Davutoglu referred to the Syrian conflict and stressed that Turkey cannot undertake the burden of accommodating all people fleeing the violence and that it is important to develop cooperation to address the tragedy. The Turkish PM spoke of talks with Greece and Germany on the matter and expressed his will to visit Greece.

The Greek Prime Minister on his behalf thanked his Turkish counterpart for the invite and stressed that his visit, which comes at a critical time, heralds the start of a new, hopeful era in the relations of the two countries. Mr. Tsipras underlined that that with constructive talks the major challenges of our times can be addressed.

Regarding the refugee crisis, the Greek PM stated that Turkey has done a lot to support the fleeing people. He also explained that religious fanaticism has created a humanitarian crisis in the Aegean and underlined the need to find a solution to provide the necessary security. The Greek PM stressed that only through discussion can any challenges be overcome.

Following a Wednesday morning meeting with Ecumenical Archbishop Bartholomew in Istanbul, the Greek Prime Minister will travel to the Turkish capital of Ankara, where is scheduled to meet his counterpart Ahmed Davutoglu at noon. A business lunch and expanded talks will follow at 13:00 and a press conference at 14:30. A meeting with President Recep Tayyip Erdogan and other political leaders will take place later in the day.

Prior to traveling to Istanbul, the Greek Prime Minister contacted German Chancellor Angela Merkel, who attended the G20 meeting. The German Chancellor informed PM Tsipras on her contacts with Turkish leaders and exchanged opinions on his trip to Turkey.

Live feed of the press conference with Mr. Davutoglu