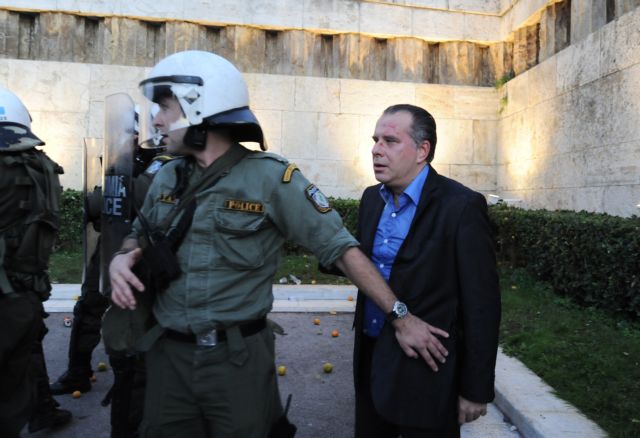 New Democracy MPs Giorgos Koumoutsakos and Miltiadis Varvitsiotis were assaulted by Golden Dawn supporters outside Parliament, near the Tomb of the Unknown Soldier. The attack took place during a demonstration of Pontic Greek groups in response to controversial statement by Education Minister Nikos Filis.

Mr. Koumoutsakos was struck in the body and face and managed to escape in Parliament, while Mr. Varvitsiotis managed to get on board a passing car. The police had to use tear gas to disperse the crowd. No arrests were carried out. Golden Dawn claims that those who assaulted Mr. Koumoutsakos were nationalists who are non-aligned with the party or belong to smaller groups.

Meanwhile it is being reported that four of the protesters who assaulted the two MPs have been identified by State Security services. Two of them are said to have been involved in violent incidents a few months ago. The Alternate Minister of Public Order Nikos Toskas expressed his sorrow for the incident and stressed that the Police will take measures to prevent any similar actions that are an affront to Democracy and members of Parliament, from taking place.

In a later interview on ERT Mr. Toskas reported that one of the suspects in the attack is a Golden Dawn member and that he will soon be arrested. According to the Alternate Minister of Public Order, the investigations will carry on in order to identify the other people who participated in the attack. As expected, the attack fueled the discussion in Parliament, with New Democracy’s provisional leader Evangelos Meimarakis alleging that Education Minister Filis incited the attack.

A video of the attack