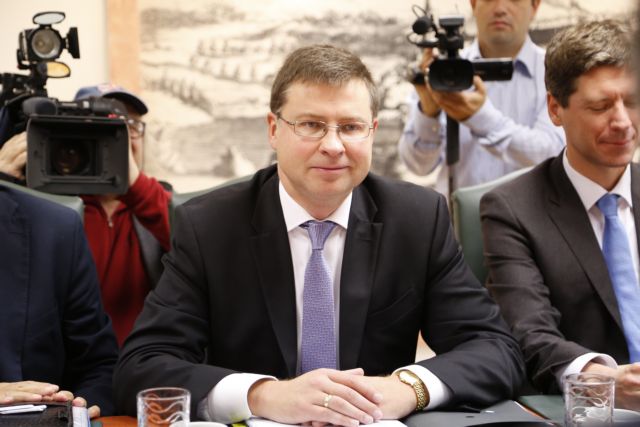 The Vice President of the European Commission Valdis Dombrovskis has arrived in Athens and is currently in a meeting with the Greek government’s top finance officers. Mr. Dombrovskis’ visit comes at a time when negotiations between Athens and its creditors appear to have been blocked. In an interview to the Sunday edition of To Vima, the Europrean Commission VP stressed that there was no time to lose.

At noon the European Commission VP will meet with the Parliamentary Committees of European Affairs, Production and Trade, as well as Financial Affairs and the Intergroup Delegation of the Hellenic Parliament. Prime Minister Alexis Tsipras will received Mr. Dombrovskis at 6:30 in the afternoon on Monday.

On Tuesday Mr. Dombrovskis will meet the Governor of the Bank of Greece Yannis Stournaras (9:30am) and the Mayor of Athens Giorgos Kaminis (10:45), followed by a visit to the Innovation and Entrepreneurship Hub INNOVATHENS, an initiative co-funded by the European Union. Mr. Dombrovskis visit in Athens will conclude with planned meetings with the social partner representatives.