Trilateral talks in Nicosia between Egypt, Cyprus and Greece begin

The trilateral talks in Nicosia between Greece, Cyprus and Egypt aimed at developing the ties of the three in finances, politics… 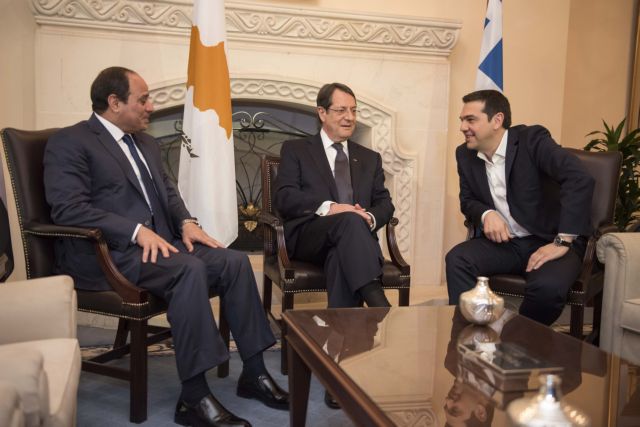 The trilateral talks in Nicosia between Greece, Cyprus and Egypt aimed at developing the ties of the three in finances, politics, energy and diplomacy have concluded, with the three leaders currently giving a press conference.

When the talks conclude, the three leaders will sing a new joint communiqué, which will outline the areas of cooperation between the three countries. Well-informed sources commented that the agreement will reflect the will of three countries to cooperate in politics, economy, trade, tourism and culture. They also noted that the agreement will include practical measures, to promote ties.

Regarding the energy sector, the agreement will clarify that the three countries will determine their exclusive economic zones. This primarily relates to Egypt and Greece, as Cyprus agreed upon EEZ limits with Egypt years ago.

At the top of the agenda at the trilateral summit in Nicosia are regional developments, the Cypriot dispute, terrorism, developments in Yemen, Syria, Iraq, Libya and the Middle East. The three sides will also debate ways in developing their ties in international and regional organizations, such as the United Nations, European Union and the Organization of Islamic Cooperation.

When asked about the possibility of Israel joining the partnership between the three, the Cypriot spokesman commented that the talks were open to other states, provided that all three sides are in agreement, adding that relevant announcements will made regarding any developments.