Athens and Berlin prepare for a showdown in Brussels 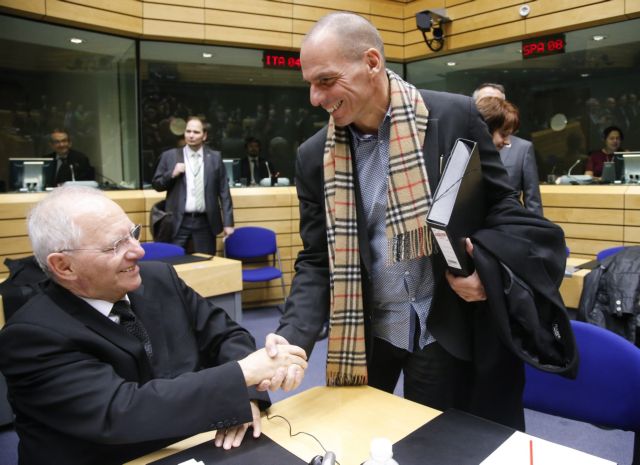 The Greek Minister of Finances Yanis Varoufakis will face off against his German counterpart Wolfgang Schäuble at the critical Eurogroup session scheduled for 4pm in Brussels today. Prior to the Eurogroup session though, the Euroworking Group will take place, with the participation of the president of the Council of Economic Advisors (SOE) Giorgos Houliarakis.

Athens and Berlin seem poised to “stick to their guns”, with Germany demanding that the current bailout program be extended, while Greece favors a bridge-program with any parameter changes to insurance or new measures in employment relations and finances. With the threat deadlock though, ti appears that there are some discussions of coming to a compromise.

This would mean that Greece would “save” about 2.7 billion euros in 2015 and 5.4 billion euros in 2016. This would also have to be accompanied by further interventions regarding the debt. In exchange though, the Greek government would have to scale back its proclamations, while producing a more “realistic” fiscal program.

The EU and IMF are also against canceling any changes that have been implemented in insurance and employment relations and have also expressed their concern over the privatizations. With the government however having repeatedly stated its intention to thoroughly scrutinize and possibly cancel many of the ongoing privatizations, it remains to be seen whether an agreement can be reached.