The Minister of National Defense Panos Kammenos announced that Greece, Cyprus and Israel would carry out joint military… 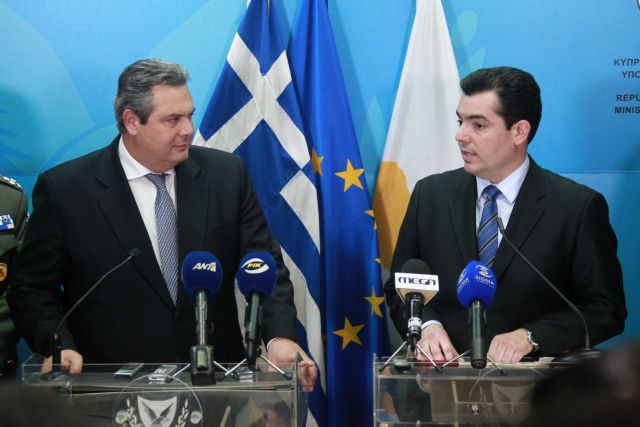 The Minister of National Defense Panos Kammenos announced that Greece, Cyprus and Israel would carry out joint military exercises, from Nicosia where he is on an official visit. Egypt may also participate in the exercises. During the press conference, Mr. Kammenos stressed that «Greece is here» and that «Cyprus is not far away«, to underline the support to the Greek Cypriot community.

Mr. Kammenos met with his Cypriot counterpart Christoforos Fokaidis and explained that the Cypriot dispute remains a matter of “invasion and occupation” for the Greek government and declared the presence of the Turkish Barbaros research vessel a “clear provocation”.

Turkish provocations continued when Mr. Kammenos was arriving in Nicosia, as a Turkish Navy frigate was instructed to enter the Cypriot EEZ and monitor the ongoing surveys for hydrocarbons.

Asked whether the Joint Defense Doctrine would be revived, Mr. Kammenos responded that plans would be made over the next few months. Mr. Fokaidis thanks Greece for its unceasing support to Cyprus and stated that Greece and Cyprus are the main pillars of stability, security and democracy in the region.