Samaras focuses on prudence and patriotism at ND anniversary 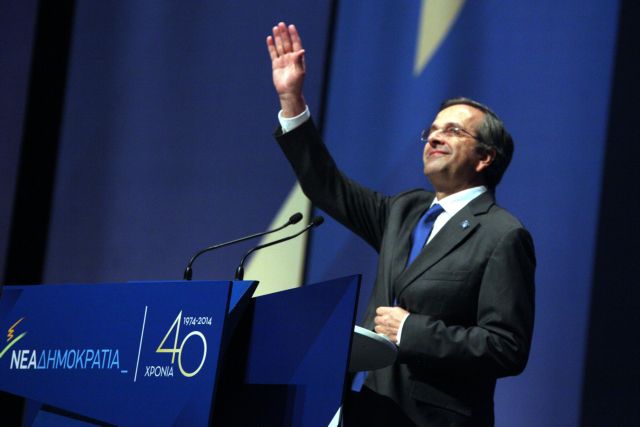 New Democracy celebrated its 40th anniversary at an event held at the Onassis Cultural Center in Athens on Saturday, which…

New Democracy celebrated its 40th anniversary at an event held at the Onassis Cultural Center in Athens on Saturday, which saw many of party’s historic members and leaders appear.

The Prime Minister and party president Antonis Samaras focused his speech of “prudence, patriotism and national unity”, alluding to the exhortation of party founder Konstantinos Karamanlis upon his return. Mr. Samaras stressed that the country would finally begin to exit the crisis “sooner than expected”, which he argued was confirmed by international organizations.

The New Democracy leader devoted a part of his speech on the tax cuts and relief measures that he intends to include in the 2015 budget, along with his efforts to curb the rampant unemployment rate. Nevertheless, Mr. Samaras argued that unless Greece overcome populism and irresponsibility, the danger of “falling back down again” will persist.

Mr. Samaras accused the main opposition party of populism and denounced the possibility of early elections, stating that “our country has no room for any huge mistakes”. The PM also referred to the recent counter-terrorism police operations and raised the “double role” that Dimitris Avramopoulos will assume at the European Commission.

Amongst the surprise appearances at the event were former Prime Minister and party leader Kostas Karamanlis and his trusted aid Thodoris Rousopoulos. Also present were former PM and honorary party leader Konstantinos Mitsotakis and other senior members such as Stavros Dimas and Dora Bakoyanni. Amongst the notable absentees were Giorgos Alogoskoufis, Giorgos Souflias and Andreas Andrianopoulos.