Samaras and Venizelos arrange to meet to discuss negotiation progress 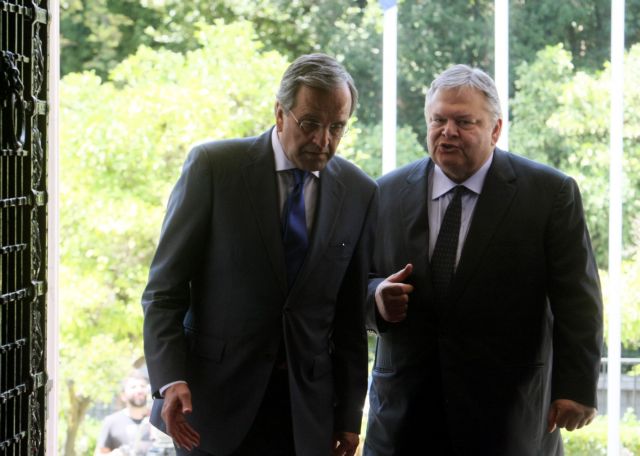 With tension arising between government officials and polls showing New Democracy trailing behind the main opposition, Prime Minister Antonis Samaras and Government Vice President Evangelos Venizelos have arranged to meet at 6pm on Wednesday to discuss their stance towards the troika in the current round of talks.

The climate within the government is not the best, as the vast majority of government officers from New Democracy and PASOK admit, however the government leaders appear determined to conclude the current negotiations and troika review as smoothly as possible.

Both partners are trying to avoid exacerbating the situation, particularly with regards to the negotiations. The presence of the PM’s consultant Chrysanthos Lazaridis in the talks between the Finance Minister and the troika was downplayed by PASOK, despite earlier reports of disapproval.

Mr. Samaras is believed to have contacted Finance Minister Gikas Hardouvelis on Tuesday evening to ensure him that the “misunderstanding” would be solved, arguing that his consultant was present due to the “experience” he has had in previous negotiations with the troika.

The Wednesday afternoon meeting will allow Samaras and Venizelos the opportunity to evaluate the progress of negotiations and consider their next moves. Their main intention is to complete the negotiations as soon as possible and prepare a series of tax relief measures to be included in the budget draft.