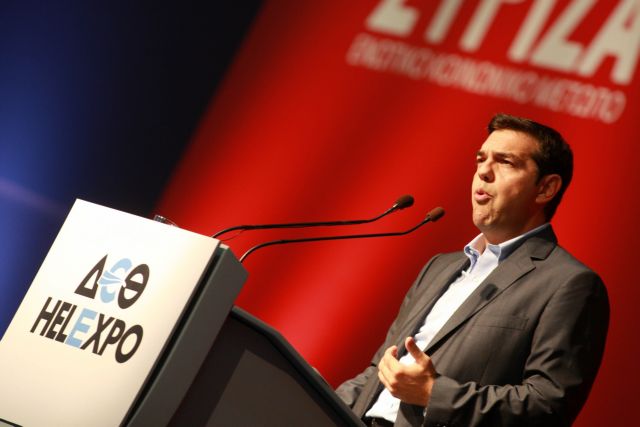 The leader of the main opposition party Alexis Tsipras appeared in Thessaloniki on Saturday for the International Fair and delivered a speech, where he presented his party’s main goals. The SYRIZA leader explained that his party would intervene and introduce measures towards four goals; addressing the humanitarian crisis, restarting the economy, encouraging employment and carrying out institutional reforms in the State.

Amongst others, Mr. Tsipras vowed to increase the tax-free threshold to 12,000 euros, replace the controversial ENFIA tax with a large real estate property tax (with a tax-free threshold of 500,000 euros), reinstate the Christmas bonus for pensioners receiving less that 700 euros a month, restore minimum wage to 751 euros, increase the unemployment benefit etc.

More specifically, the opposition leader argued that his party would pursue a new haircut for the Greek debt, so that it can became sustainable, similar to the debt haircut that happened with Germany in 1953. Mr. Tsipras spoke of introducing a “growth clause” and grace period regarding the payment of debt in to order to encourage growth. Furthermore, SYRIZA would exempt public investments from the Stability and Growth Pact, work towards a “European New Deal” with public investments and funding from the European Investment Bank.

In his speech Mr. Tsipras stressed the need for elections, claiming that only a government with a fresh public mandate has the ability and legitimation to negotiate the public debt, while accusing the Prime Minister of surrendering to the wishes of the government in Berlin. Mr. Tsipras state that “we are not asking for elections because we are rushing to govern; we ask for elections because the country cannot wait anymore and the people cannot endure anymore”.