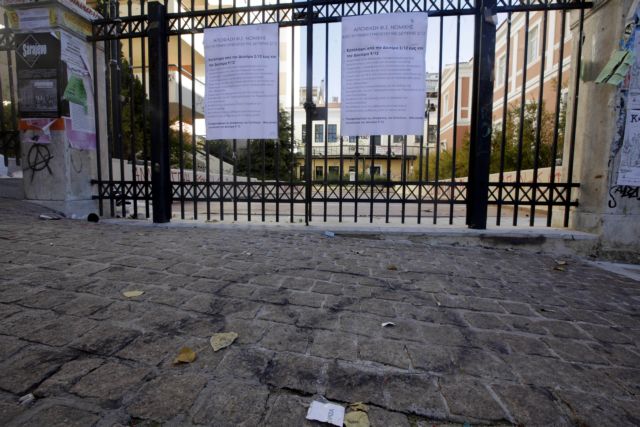 The Rector of the National Kapodistrian University of Athens called an emergency Senate meeting for this morning, as the situation at the university is getting out of hand. While some administrative employees have returned to their posts, particularly in central services and more expected to return over the next days, the strike continues.

The administrative employees decided to continue their strike on Tuesday and Wednesday after coming to a disagreement with their sector union. One faction amongst the employees has asked to end the strike and begin discussions with the Ministry of Education, while arguing that their latest meetings where marred by bullying and threats.

The Dean of the Faculty of Law, Economic and Political Sciences Michalis Tsinisizelis asked for “all departments and factions in the university and Ministry to help towards resuming teaching on the 16th of December”. Mr. Tsinisizelis cited “technical difficulties” caused by the Ministry of Education’s suspension plans which preclude employees from returning to their posts.

The president of the Department of Literature Eleni Karamalegou explained that the Senate “made a clear decision” so that “the university can operate at its fullest extent”. Mrs. Karamalegou stressed the need for real dialog in a calmer atmosphere, while noting that the semester can still be salvaged “without any discounts on the quality of teaching”.

Students occupied many university departments on Monday, including the Law School which had announced its intention to resume teaching. The Medical School has publicized its exam schedule for Wednesday and Thursday, while teaching took place in the laboratories of the Pharmacy School and Gymnastics Academy.

The executive committee of the higher education teaching staff union (POSDEP) issued a statement condemning the Minister of Education for the referral of the NKUA Rector Theodosis Pelegrinis on misconduct charges. POSDEP accused the Minister of attempting to “cover up his serious political liabilities, which have resulted in complete failure in a series of important matters in his area of responsibility”.

The full announcement by POSPED is available here.