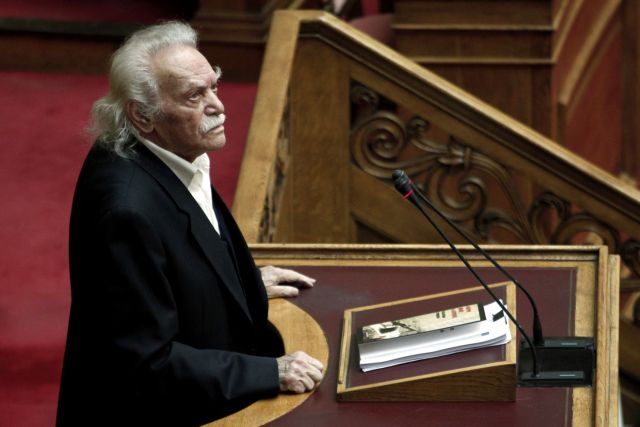 The leadership of SYRIZA is troubled by the recent scathing criticism by party member Manolis Glezos, who spoke to Vima FM on Wednesday and noted that the people are not convinced by the opposition party’s message. SYRIZA is also undecided by the DIMAR proposal to abolish a 50-seat parliamentary bonus granted to the party that wins elections.

While the associates of party leader Alexis Tsipras explained that Mr. Glezos’ criticism is welcome and in-line with their commitment and conscious efforts to become more convincing, party spokesman Panos Skourletis opined that there are significant differences of opinion on critical matters within SYRIZA, such as post-election alliances.

Mr. Glezos has professed that SYRIZA must be prepared to cooperate with ANEL “if we can agree on the basic principles”, which involves abolishing all of the unjust laws and deals that were brought on by the troika. While Mr. Skourletis did not rule out an alliance with ANEL, he estimated that “based on the expressed opinions of Mr. Kammenos so far, the conditions for such a government coalition do not exist”. Other party members, such as Nikos Voutsis who also spoke to Vima FM, adopted a more conciliatory stance and believe that an alliance with members from PASOK, ANEL and other parties from “the traditional, liberal faction” is possible.

Regarding DIMAR’s proposal to abolish the 50-seat bonus in Parliament for the winner of elections, SYRIZA has avoided detailed discussions and giving a definite answer. SYRIZA executives underlined that the DIMAR proposal is incomplete and must be examined as part of an overall discussion of the election system. Mr. Glezos on the other hand was in favor of the abolishing the bonus, which he considers to “distort the ballot” and was in favor of reinstating proportional “and unadulterated” representation.