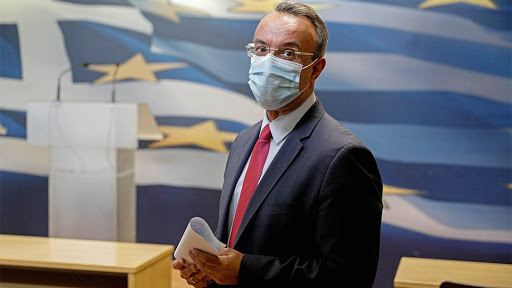 The finance minister said that the country’s cash reverses, totaling 37.5 billion euros, must be used prudently as the country must maintain adequate reserves at least through spring.

Finance Minister Christos Staikouras today announced a 3.3-billion euro package of pandemic aid to businesses and workers that will be devastated by a second nationwide a lockdown that will start at 6 am on Saturday, 7 November.

These measures include a one-off financial support of 800 euros for workers furloughed during November, expanding a fourth round of state loans to enterprises to the tune of one billion euros, the immediate return to property owners of 50 percent of losses due to the mandatory reduction of rents, expanding unemployment benefits by two months for those whose benefits were to be terminated between September and December, and offering a 400-euro financial support to 130,000 long-term unemployed people whose benefits had been terminated.

He said the government and its economic team is in a constant state of «war readiness», reacting quickly and keeping the ammunition needed for the battle against the pandemic.

The finance minister said that the country’s cash reverses, totaling 37.5 billion euros, must be used prudently and stressed that developments demonstrate that the country must maintain an adequate «arsenal» since a return to normality will be late in coming.

He also noted that although fiscal measures taken in Europe to deal with the impact of the pandemic reached 4.0 pct of GDP on average in 2020, in Greece these measures have already surpassed 6.0 pct of GDP.

Staikouras underlined in an interview with state television that the support measures will move on four axes: support of workers, businesses liquidity, suspension of tax obligations and the reduction of rents.

The minister estimated that a full lockdown will cost over 2.3 billion euros while the final draft of the 2021 state budget will include a revised forecast for a deeper recession this year.

On an optimistic note, Staikouras underlined that in 2021 the absence of strict EU fiscal rules and targets will offer the government a degree of fiscal flexibility.