It is historically unprecedented for a prime minister to call upon his ministers to vow not to topple the government, in this case over the Greece-FYROM Prespa Agreement. 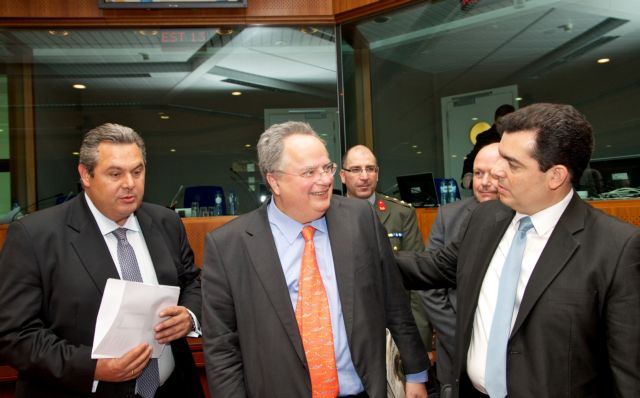 The skirmish in yesterday’s cabinet meeting categorically confirms To Vima’s headline last Sunday – Ungoverned State – which described the result of the adventurism of Defence Minister Panos Kammenos, and the toleration of Prime Minister Alexis Tsipras.

It is historically unprecedented for a prime minister to call upon his ministers to vow not to topple the government, in this case over the Greece-FYROM Prespa Agreement.

What followed was an open confrontation between Foreign Minister Nikos Kotzias and Kammenos, which confirms that the crisis in the government goes beyond the well-known disharmony between the two coalition partners and has seeped into the inner core of the government. It is now clear that the hermaphroditic ruling coalition has exceeded its limits, as the political and electoral interests of the two partners are incompatible.

The result of this clash is that the governance of the country has essentially been paralysed.

Mr. Tsipras, with his secret meetings and subterranean arrangements with his coalition partner, is trying to extend his stay in office as much as possible, but it is by now clear to everyone, even to his ministers, that he can persuade no one.

With consultations in Skopje in full gear, the coming days and weeks will be critical for the course of the incongruous ruling coalition. If the suffocating pressure of the internationals to find the 80 votes in FYROM’s Parliament to amend the consatitution, in accord with the Prespa Agreement, there may well be rapid-fire developments in the Greek government.

That explains Mr. Tsipras’ eagerness to ensure that he will not be confronted with unexpected developments, and his pleas to ministers and MPs not to abandon the ruling majority.

With the country already in a quasi-electoral period, and with a host of open issues, this situation cannot go on.

The climate of uncertainty about the next day destabilises the economy, undermines all the efforts that have been made until now, and leads to new adventures.

The sooner this alliance ends, so much the better for the country.