“I want to make clear that there is no continuation of the memorandum or anything but a clean exit from the memorandum on the horizon,” the PM said, depicting that as the paramount goal, and adding that Syriza managed to stem society’s economic suffering. 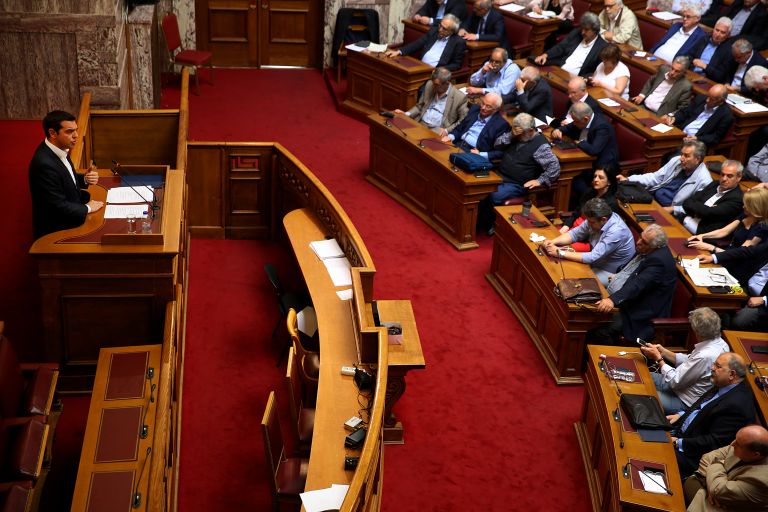 With key MPs expressing concerns about future pension cuts, a rumoured two-month extension of the bailout memorandum, and IMF demands for an early cut in the tax-free threshold, Prime Minister addressed his parliamentary group on economic and foreign policy issues, while blasting main opposition New Democracy.

But Tsipras also used his address to reject out of hand Turkish President Recep Tayyip Erdogan’s proposal that the two Greek army officers jailed in Turkey for nearly two months without charges be exchanged for eight Turkish military officers seeking asylum in Greece, and he demanded their swift return.

“We reject in the most categorical manner unacceptable trade-offs,” he said, adding that Greece has broad support on this issue, as evidenced by the demands of the EU’s leadership and the European Parliament for the immediate release and return of the Greek officers.

“I want to make clear that there is no continuation of the memorandum or anything but a clean exit from the memorandum on the horizon,” the PM said, depicting that as the paramount goal and adding that Syriza during its three years in power managed to stem society’s economic suffering.

Tsipras said that the post-memorandum era will not be paradisiac, nor will all the wounds be healed, but he asked his MPs to consider the country’s situation when Syriza came to power and how it has improved.

“We did well not abandon ship and to fight to keep the ship of state on course in the storm. We managed to accomplish the greatest objective, to stop society’s path off a cliff to misery. We managed to bring a rebound in the economy, and to support the excluded and the unemployed,” Tsipras said.

As for the IMF’s participation in the Greek programme, the PM said it is not absolutely necessary. “We have said that we are negotiating with the IMF in an effort to find a solution, yet the prospect of the IMF not participating is not the end of the world,” he said, in an apparent response to the Fund’s harsh demands for earlier tax hikes by lowering the tax free threshold at the beginning of 2019.

On relations with Turkey, Tsipras said he discerns a nervousness in Ankara’s behaviour towards Athens.

He said Greece is defending its sovereign rights and has used the country’s membership in international organisations to create a broader nexus of alliances to support Athens’ just rights.

“Our neighbours know that we are defending peace and the building of good relations with Turkey, and that we are the most fervent supporters of its European course,” the PM said, adding, however, that Turkey seems to be losing its European orientation.