Refugees on Lesvos want to be allowed leave the island

Tens of Iraqis and Syrians gathered in the central square of Mytilene on Lesvos late on Sunday afternoon, to protest that they… 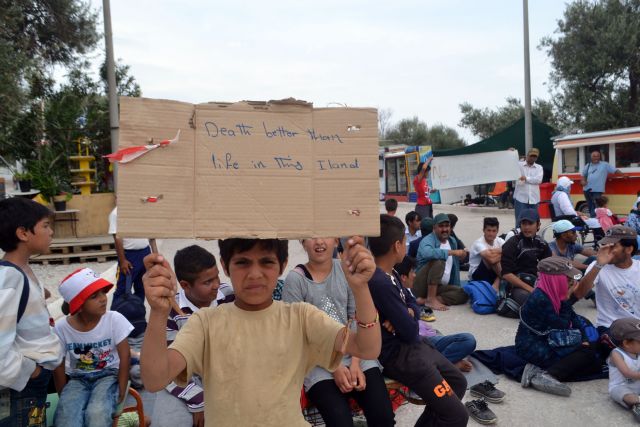 Tens of Iraqis and Syrians gathered in the central square of Mytilene on Lesvos late on Sunday afternoon, to protest that they are refugees and not criminals. The protesters, many of whom have families with young children, want to be allowed to travel to Piraeus and from then on to central or northern European countries.

A mini-revolt took place later on at the municipal camp at Kara Tepe, when a group of Afghans occupied the main entrance to the camp. The Afghan protesters demanded that a number of UNHCR officers be removed from the camp, accusing them of discrimination. The occupation only lasted for a few hours and ended without incident.

One Syrian refugee named Abdullah told To Vima that he has been on the island for about a month and a half, since the end of March. He was told to submit an application for asylum, after which point he was kept in the hot spot. The Syrian man underlined that he has run out of money and cannot be forced to live his life there. Although he has been allowed to leave the hot spot, he cannot leave the island and argued that it has become a huge prison for refuges.

According to the official police records there are currently 3,652 refugees on the island, most of whom arrived in Greece after the 20th of March, when the EU-Turkey agreement formally came into effect. About 1,500 are accommodated at the open municipal camp at Kara Tepe, while the others are at the Moria hot spot. The vast majority of refugees are allowed to move freely on the island, as authorities may only detain them at the hot spots for a maximum of 25 days.