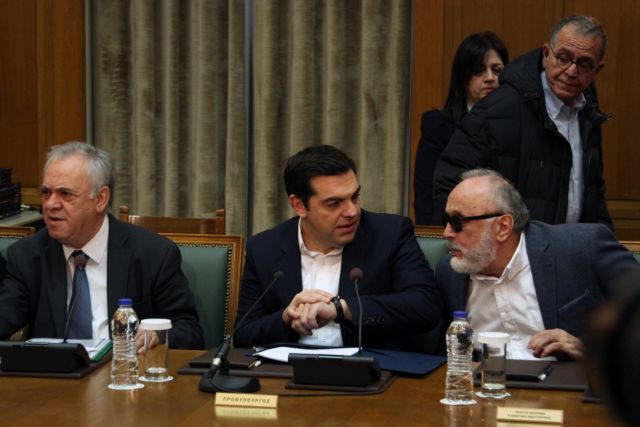 In the Wednesday morning ministerial council meeting, the Prime Minister Alexis Tsipras addressed major challenges his government faces, such as the critical review of the bailout program, the pension system, the refugee crisis and the farmer protests.

The PM began his address by underlining how Europe is faced with many challenges and crises, arguing that the refugee crisis is peaking. PM Tsipras stressed that while Europe is standing awkwardly before such a major problem, the Greek islands are making an example of the humanity necessary to address the situation. The Prime Minister also stated that the hot spots will be complete on time.

In relation to the bailout program implementation, PM Tsipras noted that his government is faithfully fulfilling its part of the agreement while prioritizing the more vulnerable classes. What remains, he continued, is for the institutions to recognizes these achievements, so that the talks on debt relief may begin, in order to regain lost ground.

The pension system reform is critical issue, which the Prime Minister claimed will be covered by raising employer contributions by 1%, as agreed with the relevant bodies in Greece. Although the reform proposal has sparked controversy, particularly among farmers and other professional sectors, the PM underlined that his government is open to talks for further improvements.

He further explained that the opposition was irresponsible in calling for the reform proposals to be withdrawn, ignoring the impact this may have on the bailout review, public debt and growth. Within the context of the farmer protests, the Prime Minister noted that New Democracy has no real counter-proposal.

Furthermore, the PM claimed that the “systemic media”, which categorically condemned farmer protests in the past, have now decided to deify their struggle in order to protect their interests, broadcasting licenses and loans which they have taken out. According to the Prime Minister, the recent developments in television licensing aim to put an end to the corruption and anarchy in the media sector. He also confirmed that four nationwide broadcasting licenses will be auctioned.