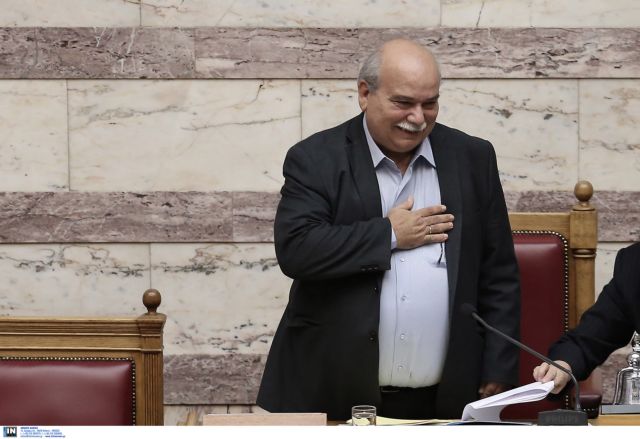 The new President received the backing of SYRIZA and the Independent Greeks, as expected, as the support all 9 MPs of the Union of Centrists and an additional 19 MPs from other parties who broke the ‘party line’. In the previous SYRIZA/Independent Greeks coalition government Mr. Voutsis had been appointed Minister of Interior.

I his first statement after his election Mr. Voutsis was critical of his predecessor, whom he accused of «ritualism«, while arguing that her statements on «Democracy being overthrown» and comparisons of the current political situation with that of the seven-year dictatorship to be “historically groundless and logically incorrect”.

New Democracy’s Nikitas Kaklamanis was elected fourth VP, while Golden Dawn’s Yannis Aivatidis did not receive the necessary votes in Parliament – the neo-Nazi party claimed that it would file an objection. From PASOK Dimitris Kremastinos was elected sixth VP and the Communist Party’s Giorgos Lamproulis was elected seventh VP.