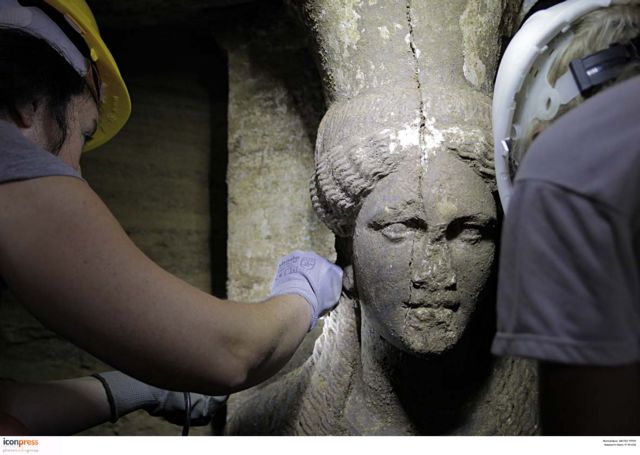 The mysterious tomb in Amphipolis appears to have been commissioned by Alexander the Great in honor of his close friend Hephaestion, announced the head of excavations Katerina Peristeri at an event at the Aristotle University of Thessaloniki on Wednesday.

According to three inscriptions bearing the signature ‘ANT’ that were recently found in the nearby area, the tomb appears to have been designed by Dinokrates or Stesikrates and was constructed at the end of the 4th century BC by Antigonus Monophthalmus. The team of archeologists believes that construction took place five or six years after the death of Alexander the Great, when the economic downturn began as his successors began to split up his empire.

During her speech Mrs. Peristeri argued that the excavations have demonstrated that the deceased was worshiped and noticed the dualistic nature of many symbols and findings within the tomb; from the two Sphinxes at the exterior entrance, to the two Caryatid statues inside and the two horses depicted in the mosaic.