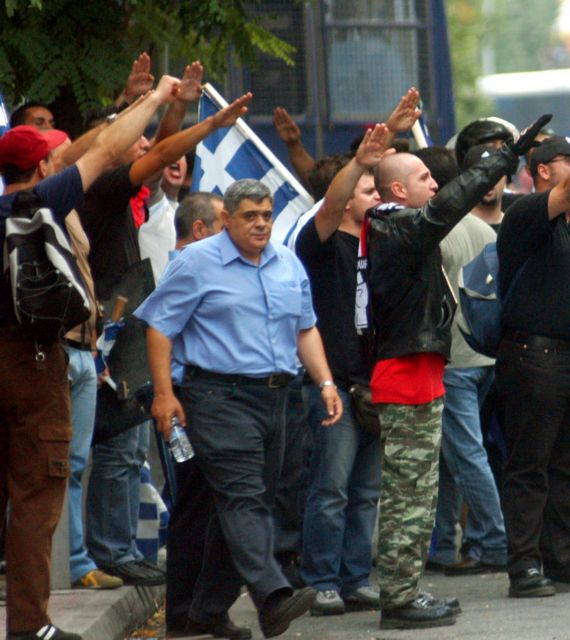 The general secretary of Golden Dawn Nikos Michaloliakos cynically announced that his party accepts the political responsibility for the murder of Pavlos Fyssas in 2013, in a radio interview on Real FM.

Audaciously, Michaloliakos was quick to claim that “there is no criminal liability” in the murder and questioned whether it was fair for an entire party to be condemned over such a “reprehensible act”. In his “confession” Michaloliakos essentially admits to the existence of organized assault groups and attempted to draw comparissons with the the murders of Nikos Temponeras and Grigoris Lambrakis.

Fyssas, a known anti-fascist activist and rapper, was murdered on 18 September 2013 by a prominent member of the neo-Nazi party, Giorgos Roupakias. Although Golden Dawn initially claimed that it had no association with the murderer, however photographic evidence and a slew of witness reports have proven otherwise.

A response was issued by SYRIZA, arguing that the assumption of responsibility one day before the anniversary of Fyssas’ murder “angers every democratic citizen who fights and desires the rule of law” and underlines that “the rhetoric of hate, the assault squads, armed from the social desperation that has been spread by the crisis, take advantage of the human drama in order to expand”. The statement stresses that the murder of Pavlos Fyssas “reveals ugly face of Golden Dawn to Greek society: a murderous, fascist gang that turns against those who are weaker by any means, using a falsified anti-systemic as cover”.

The statements of Nikos Michaloliakos were dubbed “shameless” by New Democracy, with the conservative party arguing that the “provocative confession during the election campaign period aims to terrorist the people and parties”. New Democracy underlined that it will not be terrorized and defending democracy requires “action and constant vigilance”.

In it statement the Popular Union reports that the confession on “the cold-blooded murder of Fyssas proves that it was not an isolated incident, but the result of the fascist ideology, formation and practices of the neo-Nazi organization”. The part calls for an escalation of struggle against the bailout and fascism and called for mass participation in the antifascist demonstrations and rallies on Friday.

The River: Every vote for Golden Dawn celebrates its crimes

“The assumption of the political responsibility of P. Fyssas from the Golden Dawn leader N. Michaloliakos undoubtedly illustrates the criminal nature of this organization” argues the River in its statement. The River further argues that “after this outright confession, nobody can claim to have been deceived” and called for the people to vote against the neo-Nazi party on Sunday.

Soon after Michaloliakos’ on-air confession was publicized, PASOK issued a statement, calling the Greek people to “respond to this challenge” and “block the path of this gang of murderers” in the upcoming elections. The statement underlines that Golden Dawn pretended to be unaware and not responsible and now “the neo-Nazis boldly defend their criminal policy, attempting only to escape the criminal consequences”.

Independent Greeks: “The half confession reveals the unfathomable cowardice”

In their response, the Independent Greeks commented that “the half ‘assumption’ of responsibility – only politically, but not criminally” reveals the “unfathomable cowardice and ugly face of the neo-Nazi organization” as well as the “cynicism of the purely electoral intentions of this provocative confession”. The statement concludes that Golden Dawn has been condemned in the Greek people’s consciousness and this must be reflected in Sunday’s elections.