Leading up to the third critical vote in the Presidential elections 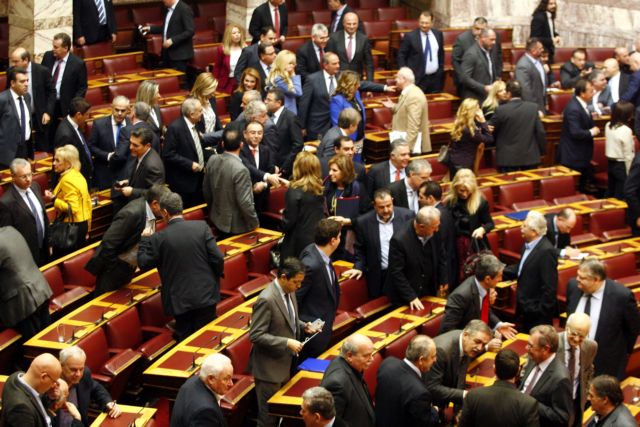 The political pressure is expected to intensify over the next days leading up to the third vote for a new President on the 29th of December, which it will be determined whether early general elections will be called or not. The coalition government has not secured the necessary 180 votes to avert snap elections; however the chances of Stavros Dimas being elected have not yet dissipated. His candidacy received 168 votes on Wednesday and while it will be very difficult to find them, it is not impossible.

Government officers argued that the next few days will see pressure increase as the third vote approaches, as is evident of the Prime Minister Antonis Samaras’ statement that MPs will be faced with the agony of the Greek people and the country’s interests. He was essentially addressing the parliamentary groups of the Independent Greeks and the Democratic Left, the two opposition parties from which the coalition government has any chance of attracting MP votes.

Of the 25 independent MPs the 13 have already voted for Stavros Dimas, but is seems rather unlikely that more than 3 or 4 of the remaining 12 will consider following suit on Monday’s critical vote. As such, the coalition government will aim to draw 8-9 MPs from DIMAR (9 MPs) and ANEL (12 MPs).

The government Vice President Evangelos Venizelos spoke hinted towards the Prime Minister taking an initiative that will contribute towards reaching a consensus, although there is no speculation as to what this may be. While it has been suggested that Mr. Dimas would be replaced in the third vote, this possibility has consistently been ruled out. Nevertheless, government officers claim that the PM will take initiatives that will make it easier for certain MPs to vote for Mr. Dimas.

The recent scandal involving ANEL MP Pavlos Haikalis has exacerbated the political atmosphere and the Prime Minister has decided to associate SYRIZA and ANEL with “terrorism and mudslinging”, while referring political anomalies. Mr. Samaras on the contrary adopted a more reserved outlook and argued that his is struggling to safeguard the efforts and achievements of the Greek people.