Archeologists had discovered an ancient tombstone, which dates to the fourth century BC, in a dig that is taking place in… 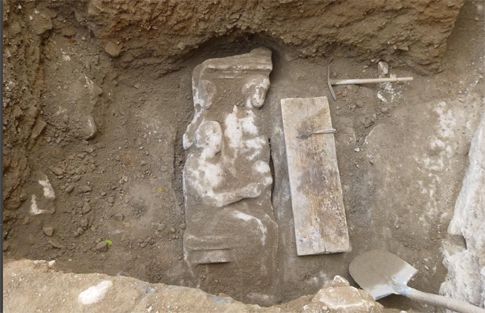 Archeologists had discovered an ancient tombstone, which dates to the fourth century BC, in a dig that is taking place in Keramikos. The dig is carried out by the German Archeological Institute in cooperation with the Athens Ephorate of Antiquities.

According to the archeologist report, the tombstone depicts two female divs (a woman and a young girl) and a bearded male div. The tombstone also sports a barely-legible inscription of the name “Dimostratos”.

The archeologists estimate that based on the shape and presentation the tombstone dates back to the third quarter of the fourth century BC. It seems that the tombstone was initially placed in an ancient cemetery before being reused later in the construction of a building, possibly a door frame.

It then seems that part of the tombstone was used as a cover in the sewage system beneath the Iera Odos during the 6th century, when Athens’ water supply system was repaired.

The excavation at the site in Keramikos is expected to conclude by the end of the year.