Amphipolis tomb may belong to a member of the Macedonian dynasty 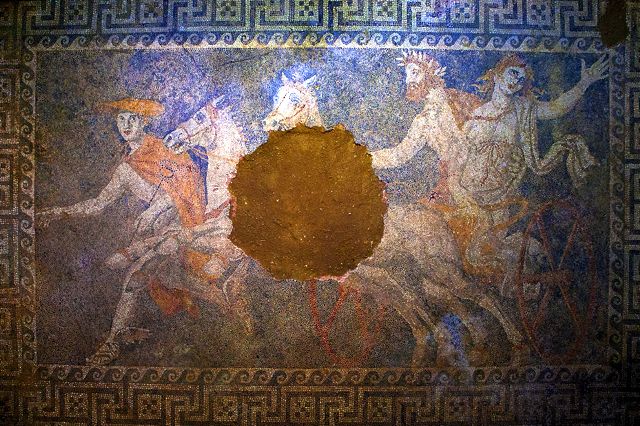 The impressive mosaic depicting the Abduction of Persephone by Pluto that was recently revealed in the Amphipolis tomb has fascinated and stunned archeologists for its unique detail and colors. According to the statement issued by the Ministry of Culture, the mosaic in Amphipolis appears to have been inspired by a similar wall painting depicting that was found in the so-called Tomb of Persephone, in the royal tomb in Vergina.

While the identity of the person for whom the tomb was constructed still remains a mystery, the archeological team undertaking the efforts believes that it probably belongs to an important div. The head of the archeological dig, Katerina Peristeri, told journalists that the person entombed was “without a doubt extremely important”.

When further pressed by journalists, Mrs. Peristeri stressed that it was too early to determine whether the tomb in Amphipolis belong to a member of the royal Macedonian family, but pointed out that the tomb’s importance increased with the discovery of the mosaic. As for the circular gap in the middle of the mosaic, Mrs. Peristeri noted that the damage does not appear to have been caused naturally, without further elaborating.

Editorial: On the right side of history

The general secretary of the Ministry of Culture Lina Mendoni reassured journalists that the findings would remain in the area, dispelling rumors that they were to be transferred to other museums. Mrs. Mendoni added that the Ministry’s policy is to return artifacts to the area where they were discovered, even from older digs.

The municipal council of Setter recently voted in favor of creating museums to house the findings, one in Amphipolis and another in Serres.