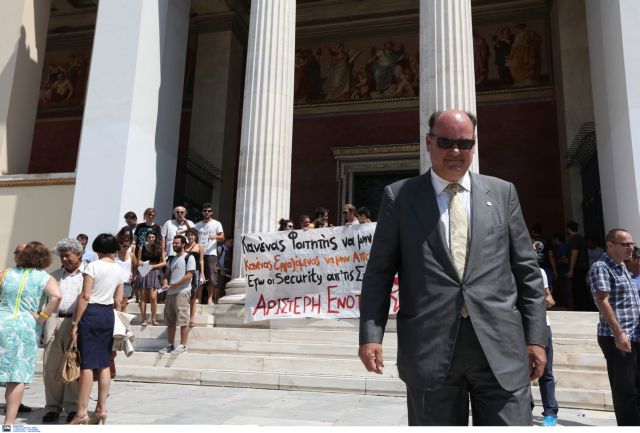 A group of about twenty students interrupted the inauguration ceremony of the new Rector of the University of Athens Theodoros Fortsakis on Monday morning, in response toe the proposed expulsion of thousands of “eternal students” from the universities and the budget cuts affecting education.

The students, who also interrupted an event hosted by the outgoing Rector Theodosis Pelegrinis on Thursday, have argued against the coalition government’s intentions to expel thousands of the “eternal students”, targeting the Minister of Education Andreas Loverdos and Mr. Fortsakis in their slogans.

After the inauguration ceremony, which as officiated by the Metropolitan Bishop of Messinia Chrysostomos, Mr. Fortsakis spoke of “signs of collapse” and noted the measures must be taken. The Rector clarified that while he did not wish police presence on university grounds, “there must be security for protection and order”.

The Rector also spoke with some of the demonstrating students and explained that his is in favor of a 4+2 years deadline for completing studies, while adding that a 4+4 year deadline is only offered in other European countries to students who can prove they are employed.