The Ukrainian crisis and recent developments in Greece and Europe were at the top of the agenda on Monday, when SYRIZA president Alexis Tsipras… 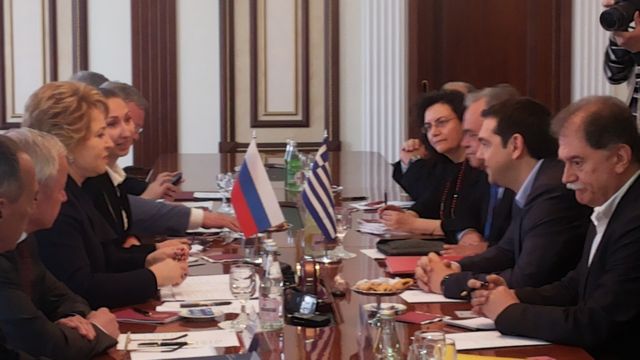 The Ukrainian crisis and recent developments in Greece and Europe were at the top of the agenda on Monday, when SYRIZA president Alexis Tsipras and party representatives met with the Chairman of the Federation Council Valentina Matviyenko.

According to reports, Mrs. Matviyenko expressed her sorrow to Mrs. Tsipras that Greece has agreed to the European sanctions and as such she is unable to visit Greece. Chairman Matviyenko had extended an invitation to the President of Parliament Evangelos Meimarakis a few months ago.

In the discussions, the Russian side stressed that there was room to further develop relations between the two countries, while hinting towards unfulfilled promises made by the Greek government.

In relation to the developments in Ukraine, the SYRIZA envoy argued that the solution lies in diplomacy rather than military intervention. Additionally, Mr. Tsipras underlined the importance of Russia in relation to security in Europe and noted that his party wants to avoid sparking a new crisis in the heart of Europe.

Sources close to the opposition party claim that Mr. Tsipras intends to pursue a “multidimensional foreign policy” and that Moscow approached SYRIZA as a potential Greek government, suggesting an improvement in the contacts and relations between the two sides.

On his first day in the Russian capital, Mr. Tsipras attended an event at the Institute of Strategic Studies, which is run by the Kremlin. The event was dedicated to geopolitical and strategic developments in the greater region. In the discussions that followed, it was argued that despite frequently being invoked, Greek and Russian relations have not flourished.