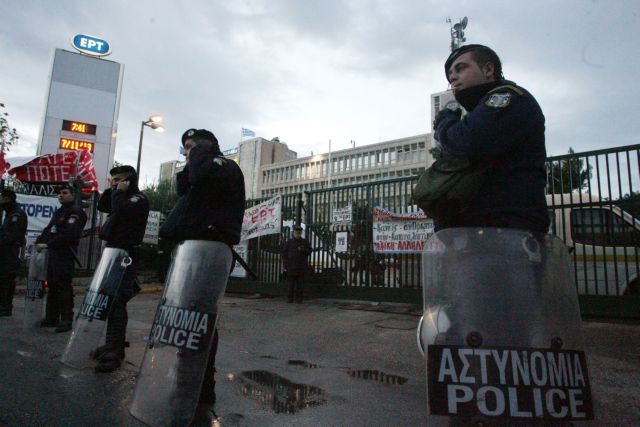 At around 4:20am riot police entered the ERT HQ in Agia Paraskevi to evacuate the building of ERT employees and supporters, which has been occupied since June.

The area surrounding the premises has been cordoned off and the police have requested that the employees vacate the premises. Media employee unions and outlets have called a walkout between 3pm and 6pm, with a solidarity and demonstration protest organized for 4pm.

According to SKAI TV, they contacted the Deputy Minister of Public Radio and Television Pantelis Kapsis and he claimed to be unaware of the police operation. The government spokesman Simos Kedikoglou commented that “the Police operation at the ERT HQ was conducted to implement and uphold the rule of law. The premises were illegally occupied, damaging the Greek State every day and the operation was conducted in the presence of a prosecutor”.

During the police operations four people were detained by the police, including the president of ERT employee union (POSPERT) P. Kalfagiannis and the public radio (ERA) employee representative Nikos Tsimpidis. The Minister of Public Ordered Nikos Dendias ordered the release of the detainees just after 8am.

According to the ERT employee representative Mache Nikolara the riot police used tear gas and heavy handed methods “alluding to older times” to subdue and push in their efforts to evacuate the building. The police entered by the side entrance on Dimitsanas Street and have sealed off the main entrance with chains and handcuffs. The police announced that the evacuation was conducted in the presence of a prosecutor and was complete by 8.30. Police units are stations on-site to hand over the building to its owner, namely the Ministry of Finances.

The president of the Athens Journalist Union ESIEA Maria Antoniadou requested that union representative be allowed on-site to ensure that the technical equipment is secured. The president of the nationwide journalist union POESY Giorgos Savvidis denounced the police operation as “undemocratic” and stated that “ten days before the 17th of November [anniversary] the government decided to undertake a similar invasion in the temple of democracy and information” while adding that such police invasions only occur during periods of unrest.

Amongst the ERT employees protesting outside the premises are KKE MPs Diamanto Manolakou and Spyros Halvatzis and SYRIZA MPs Nikos Voutsis, Dimitris Stratoulis, Zoi Konstantopoulou and Nantia Valavani, who condemned the police operation as a new example of the government’s absolutism. The MPs tried to enter the building, but the prosecutor did not allow it.

A solidarity demonstration is also taking place outside the occupied ERT3 premises in Thessaloniki, with the support of SYRIZA MPs Panagiotis Lafazanis, Yannis Amanatidis and Despina Haralambidou. The ERT3 employees fear that a similar police operation in Thessaloniki is immanent.