Erdogan: Tsipras could not hand over our eight officers, nor can I return their two 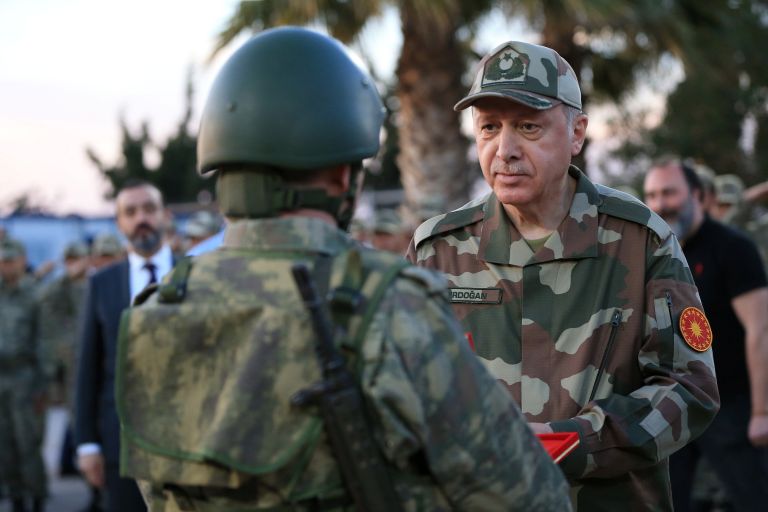 He said that just as Tsipras, despite his promises [Erdogan says Tsipras promised to return them in two weeks], could not arrange the case of the eight “terrorist” military officers, so too he cannot do something about the two Greek army officers.

Erdogan and the Turkish justice system are accusing the eight Turkish officers in participating in the plot against Turkey’s president.

They deny all involvement, and the Greek Supreme Court has irrevocably barred their extradition to Turkey, as they could not be guaranteed a fair trial.

“I am sorry, but we too operate under the rule of law,” he tells European interlocutors, charging that they raised a fuss over the two Greek officers, but for the Turkish officers, who are “terrorists”, they did not issue even the slightest admonition to Greece.

Erdogan was speaking in the province of Hatay, Antakya. “You know, certain individuals tried to kill me and then escaped by helicopter to Greece. At that time, Mr. Tsipras, to whom I spoke, told me that within 10-15 days he would arrange the situation. Days and months have gone by, and he still has not arranged the surrender of the eight Gulenists,” he said, referring to the supporters of Islamist cleric Fetullah Gulen, whom Erdogan blames for the July, 2016 abortive coup against him.

“A few days ago, we caught two Greek military officers who violated the borders. The entire West rose up. They said you are a great state, give them to us. I am very sorry, but we are also a state under the rule of law. This case is being handled by the judiciary. Whatever the justice system decides will happen. Stop it. You did nothing about these terrorists. You said nothing to Tsipras about them,” Erdogan declared.