The objective of Athens and Nicosia today is for the summit to issue a stern warning to Turkey, even as Turkish President Recep Tayyip decided to begin gas and oil exploration in Cyprus’ Exclusive Economic Zone. 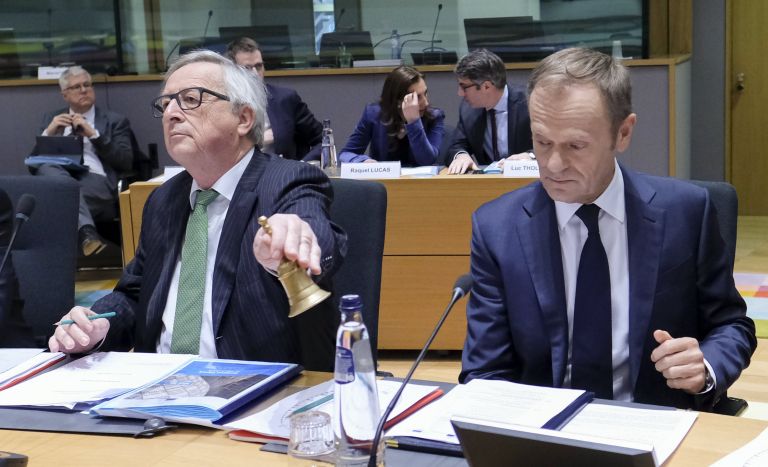 Prime Minister Alexis Tsipras and Cyprus’ President Nikos Anastasiadis will detail Turkey’s mounting provocations in Cyprus’ Exclusive Economic Zone and in the Aegean, at the EU summit that is being held today and tomorrow.

Building on European Council President Donald Tusk’s 23 February declaration of support for Cyprus and Greece and the EU leaders’ “urgent” call for Turkey to cease its provocations – which clearly fell on deaf ears in Ankara – the objective of Athens and Nicosia today is for the summit to issue a stern warning to Turkey, even as Turkish President Recep Tayyip ratcheted up the pressure with his decision to begin gas and oil exploration in Cyprus’ Exclusive Economic Zone.

The draft conclusions of the summit indeed contain a strongly-worded warning to Ankara, but the wording can be tweaked and changed until the last minute in an effort to balance countries’ differing positions on key issues.

The leaders of Greece and Cyprus want a statement that will denounce Turkey’s violations of international law, and of the law of the sea in particular, and the almost daily threats from Erdogan, his prime minister, and his foreign minister, against the sovereign rights and territorial integrity of Greece and Cyprus.

In that context, Tsipras will also attempt to mobilise fellow leaders to condemn Turkey’s capture and imprisonment in a top-security Turkish prison of two Greek army officers, and to exert the maximum diplomatic pressure to secure their release.

Developments in the Balkans

Engaged in talks with FYROM and Albania to settle all outstanding differences, about which he decided to brief the summit, Tsipras was to stress Greece’s unswerving support for the EU accession of Western Balkan countries.
Indeed, the Western Balkans’ European perspective was first officially declared at a 2003 summit in Thessaloniki, when Greece held the rotating EU presidency.

The summit agenda is focused on the course of the eurozone and the European economy more generally, the fair taxation of the burgeoning digital economy, the EU stance on US tariffs on steel and aluminum, issues pertaining to Brexit, EU-Russia relations, and the latest developments with Turkey and its invasion of Syria.

On the sidelines of the summit, Tsipras has scheduled meetings with top EU leaders – Tusk, German Chancellor Angela Merkel, French President Emmanuel Macron, and British PM Theresa May – in which he will also focus on Turkish aggression and the consequent grave threats to regional security and stability, as well as progress and challenges in pursuing a settlement with Skopje, and heightened Turkish hostility towards Greece and Cyprus.