The opposition leaders are expected to receive the government’s reform proposals by midday on Thursday, with government… 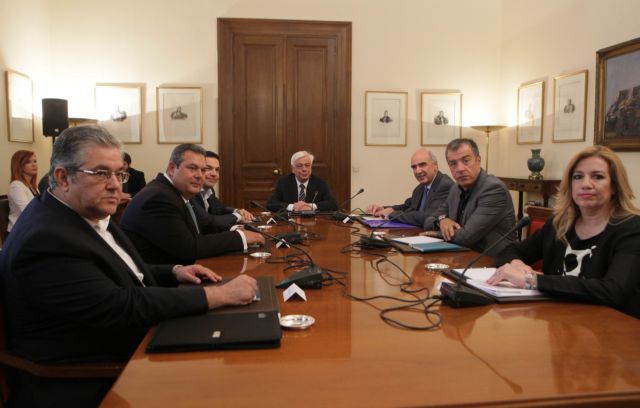 The opposition leaders are expected to receive the government’s reform proposals by midday on Thursday, with government officers insisting that the aim is to reach an agreement that will keep Greece within the European Union and Eurozone.

Shortly after his return from Strasbourg, Prime Minister Tsipras updated President Pavlopoulos on the progress of negotiations and later contacted Evangelos Meimarakis, Stavros Theodorakis, Fofi Gennimata and Dimitris Koutsoumpas. A new meeting may be arranged on Friday or Saturday.

While the PM has argued that he is confident of reaching an agreement with Greece’s international creditors, he is reportedly concerned about Germany’s hard stance towards the Greek requests, at a moment when Jean-Claude Juncker, Mario Draghi and Francois Hollande have expressed their support of the Greek efforts.

There are also concerns that an attempt may be made at the last moment to “sabotage” an agreement in order to cause a default and force Greece to leave the euro. In his speech in the European Parliament the PM underlined that there are no secret plans for a return to the drachma.