The council meeting of political leaders will begin at 10am on Monday, at the initiative of Prime Minister Alexis Tsipras, following a… 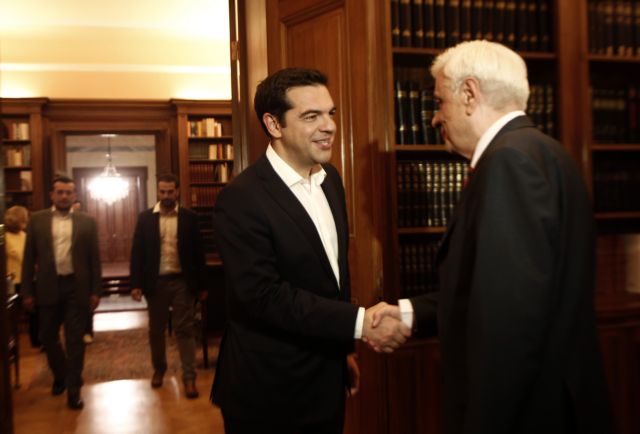 The council meeting of political leaders will begin at 10am on Monday, at the initiative of Prime Minister Alexis Tsipras, following a meeting with President Prokopis Pavlopoulos late on Sunday evening.

After a short meeting with the President, the Prime Minister noted that it is important to focus on unity and continue the negotiations, while stressing the need to restore the country’s banking system. The President on his behalf commented that Greece was and will remain an integral part of the European Union and Eurozone.

The PM will be joined by New Democracy’s Evangelos Meimarakis, who has replaced outgoing leader Antonis Samaras until a new President is elected, The River’s Stavros Theodorakis, KKE’s Dimitris Koutsoumpas, the Independent Greeks’ Panos Kammenos and PASOK leader Fofi Gennimata. The general secretary of Golden Dawn Nikos Michaloliakos will not participate in the meeting.

Sources reported that the proposal for the formation of a national negotiation team has been made, however no decisions regarding this matter have yet been made.

During the meeting, the Prime Minister contacted the president of the European Central Bank Mario Draghi to discuss liquidity in the Greek banking system. The Russian President Vladimir Putin is said to have requested to speak with the Greek Prime Minister.

Meanwhile, the Minister of Productive Reconstruction Panagiotis Lafazanis was called out to the meeting, at the request of the political leaders. Mr. Lafazanis had a private conversation with the Prime Minister and it has been reported that a contact with the Russian President may take place.