A group of about 20-25 anarchists managed to enter the courtyard in Parliament, where they raised a banner in support of the… 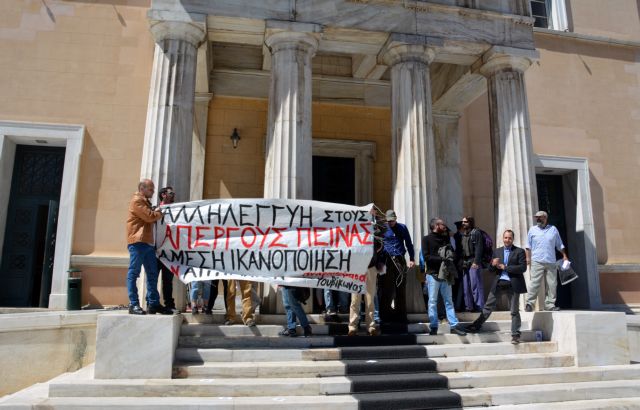 A group of about 20-25 anarchists managed to enter the courtyard in Parliament, where they raised a banner in support of the hunger strikers at the entrance of the main building.

After shouting some slogans, the anarchists departed, without any tension being caused. All gates and entrances to Parliament have been closed as a precaution. Shortly afterwards the police announced that it detained about 15 of the anarchists who carried out the protest in the Parliament courtyard.

The former Minister of Public Order for New Democracy, Vasilis Kikilias, told journalists that the government has «lost control«. Nikos Dendias called the government to safeguard the rule of law. When asked about the protest, the President of Parliament Zoi Konstantopoulou asked journalists whether they were «upset because some [people] demonstrated«.

It has been reported that a number of opposition MPs demanded the resignation of the Alternate Minister of Public Order Yannis Panousis over the unprecedented incident.

The government spokesman Gabriel Sakellaridis issued a statement, noting that the invasion in the courtyard of Parliament was “provocative and incomprehensible”, while arguing that such actions work against “the government’s decision to remove the railings of shame from the courtyard”.

Mr. Sakellaridis reiterated the government pledge to abolish the “Type C” prison facilities (one of the main protestor demands), as well as to take steps towards “humanizing” the country’s penal system. The spokesman further stressed that the government is committed to safeguarding human life, the rule of law and order.