All passengers and crew members have been evacuated from the Norman Atlantic, which went up in flames early on Sunday… 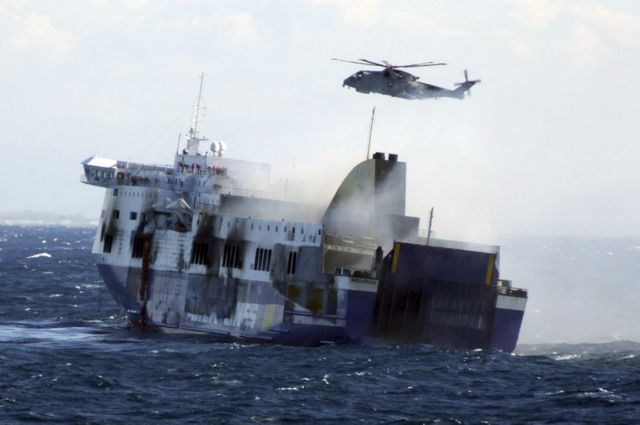 All passengers and crew members have been evacuated from the Norman Atlantic, which went up in flames early on Sunday, thanks to the efforts of the Greek and Italian services. Ten people died in the tragedy, with two of the victims having being found inside the burnt vessel.

At present the Italian authorities are identifying those rescued by cross-referencing them with the passenger list, while rescue teams continue to search the ship’s interior for more people who may still be trapped. It was reported on Monday that one person who died while trying to escape the burning vessel was a Greek, while Italian authorities confirmed that a second victim was a Greek national.

Confusion over number of passengers

There is some confusion as to the number of people who were on board the Norman Atlantic. Greek authorities claim that 432 people were rescued from the 478 on-board, with 36 people still missing. The Italian Minister of Defense Roberta Pinotti however told journalist that 427 people were rescued, of the 458 on-board, with a further 23 still missing. Meanwhile ANEK, the Greek shipping company that had leased out the Norman Atlantic, claims that there were 475 people on-board. The confusion appears to stem from the difference in the passenger list and the list of reservations.

Late on Monday evening the Cruise Europa reached the port of Igoumenitsa, carrying 69 people evacuated from the burning ship, amongst whom there are 38 Greeks. Teams of medics were awaiting those rescued and only nine had to be hospitalized for further treated. Ten of them later boarded the Cruise Europa and were taken to Patra, while the remaining 50 have been put up at a local hotel.

Earlier on Monday the Spirit of Piraeus reached the port of Bari with 49 people rescued, including 27 Greeks and three children, while a C-130 taking off from Lecce brought back 43 people who wanted to return to Greece. Aegean Air has also offered to help repatriate people rescued from the Norman Atlantic free of charge.

The Italian authorities have sent Athens a list with the details of 95 Greek nationals who were rescued from the Norman Atlantic. The list is available here.

The nationwide seamen federation PNO issued a statement questioning the circumstances that resulted in the tragedy and stressed that the small number of crew members – only 55 on-board the Norman Atlantic – may have an impact on the degree of security that is offered. PNO also expressed its hope that this tragedy will allow for a revision of the policies observed in recent years, which have seen reduction of crew members and wages.