The third critical vote in Parliament for the election of a new President of the Republic took place at noon, as the sole candidate… 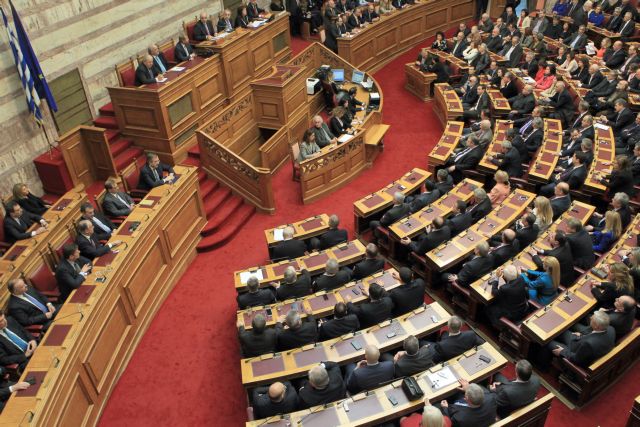 The third critical vote in Parliament for the election of a new President of the Republic took place at noon, as the sole candidate Stavros Dimas failed to be elected President. Mr. Dimas stated that he “expected the result” and added that he is “never disappointed, I always remain calm”.

In total Mr. Dimas received 168 votes, the same he received in the second vote last week, while 132 voted “present”. According to constitutional provisions, Parliament must dissolve within 10 days and general elections must then take place within 30 days. The Prime Minister announced that the general elections would take place on the 25th of January.

Tatsopoulos: “We must avoid polarization in election period”

Following the conclusion of the vote in Parliament, independent MP Petros Tatsopoulos told Mega Channel the vote resulted in “a very extreme polarization” and added that “it would be good to not cultivate that climate in the election campaign period”.

Bakoyanni: «General elections against the will of the Greek people»

New Democracy’s Dora Bakoyanni claimed that the opposition forced the general elections “against the will of the Greek people” and estimated that the elections would take place under very difficult financial circumstances.

The main opposition party leader Alexis Tsipras, who was pleased with the outcome of the vote, commented that it was “a historic day for Greek democracy” and that “the future has begun”. Mr. Tsipras also expressed his sorrow for the dramatic incident at sea and praised the rescue efforts.

Kouvelis: “Today is the start of new developments”

On his way out of Parliament, the leader of the Democratic Left Fotis Kouvelis told journalists that “the government chose to bring national elections forward with the Presidential election. Today will be the start of new developments” and that the “country ought to turn a page and attain a progressive nature”.

The Prime Minister Antonis Samaras commented that “we did all we can to avert early elections, which entail serious dangers” and claimed that “the great majority” oppose early elections. Mr. Samaras added that “a minority of 132 MPs, amongst which SYRIZA and Golden Dawn, are dragging the country to elections«.

Theodorakis: “Now it is the time of the people”

The leader of The River Stavros Theodorakis commented that “the professionals of politics have played their political games guided by the partisan stubbornness. Now it is the time of the people” and called the Greek people to defy “blind partisanship” claiming his party is ready for the major challenges.

Kammenos: “The Samaras-Venizelos parenthesis has closed”

The president of the Independent Greeks Panos Kammenos commented that “the Samaras-Venizelos parenthesis has closed, the duo that surrendered the country’s sovereignty is finally abandoning the government”. Mr. Kammenos added that his party “acted as regulators and will now act as guarantors”, while calling for a national consensus.

Lafazanis: “The people will give SYRIZA a parliamentary majority”

SYRIZA MP Panagiotis Lafazanis argued that the coalition government parties suffered a defeat in Parliament today and claimed that it would be “crushed” at the upcoming elections. Mr. Lafazanis claimed that his party would receive the parliamentary majority and argued that the bailouts are “in the past” and that “the troika’s presence in the country will end”.

Venizelos: “We must secure the Greek people’s dramatic sacrifices”

The government Vice President and PASOK leader Evangelos Venizelos expressed his concern over the developments in the Adriatic Sea and praised the efforts of the Armed Forces in Greece and Italy. Mr. Venizelos opined that the snap elections “were forced” and that future of the economy is uncertain, while professing that “we must ensure the dramatic sacrifices of the Greek people” and that “PASOK will be the guarantor of orderly developments”.

Koutsoumpas: “We have paid enough for the lies of the EU parties”

The general secretary of Communist Party Dimitris Koutsoumpas commented that “we have paid enough for the lies of the EU parties. We have bled enough for the monopolies” and called for popular support in the upcoming general elections. Party MP Thanasis Pafilis urged the people to reject the scaremongering of “the EU allies” and the “false hopes and dangers”.

Hardouvelis: “We may need to issue treasury bills in March»

The Minister of Finances Gikas Hardouvelis commented that at present there were no funding problems experienced and that should the need arise, the government can issue treasury bills. Mr. Hardouvelis pointed out that he predicted that the Greek State may need to do so in March.

Tragakis: «The people will punish them»

The New Democracy MP Yannis Tragakis told journalists that “SYRIZA and two other parties that will not be in the next Parliament are leading this country to elections” and added that “the people will punish them”.