A monument in memory of antifascist activist and rapper Pavlos Fyssas was unveiled in Keratsini on Thursday, at the spot… 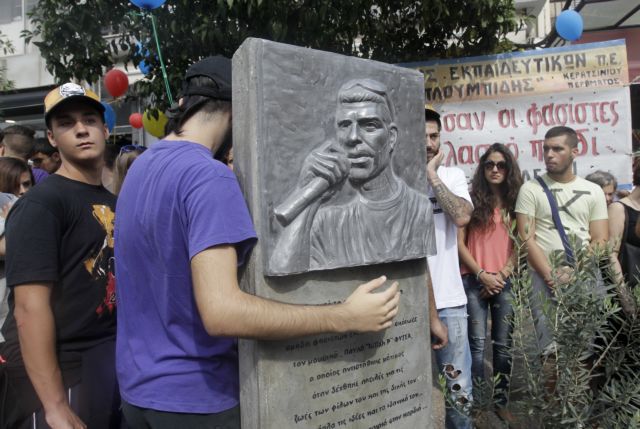 A monument in memory of antifascist activist and rapper Pavlos Fyssas was unveiled in Keratsini on Thursday, at the spot where he was murdered by Golden Dawn member Giorgos Roupakias. Thousands attended the ceremony and demonstrated in the streets of Keratsini.

During the demonstration in Keratsini clashes broke out between the police and a group of about 500 protesters. The police detained about 60 protesters for damages caused to businesses. Similar clashes also broke out in Patra, Mytilene and Thessaloniki during antifascist demonstrations.

The mayor of Keratsini Christos Vrettakos told reporter that “fascism in uniform has struck Keratsini” in reference to the clashes which broke out between riot police and protesters. Amongst the people injured in the clashes were three photo reporters.

The antifascist demonstrations continue on Friday in Greece and beyond. Antifascist groups in many European cities (Paris, Madrid, Barcelona, London, Belfast, Dublin, Stockholm, Copenhagen etc) have organized symbolic protests. Syntagma square in Athens will host a concert, which will be broadcast live over the Internet.

On Sunday an antifascist festival will take place at Selepetsari park in Keratsini, while the Sunday migrant school and the “Deport Racism” group have organized a festival at Kolonos Hill on the 27th and 28th of September.