‘We condemn without reservation the vandalism of Parliament. Such actions are deeply undemocratic and have nothing to do with social struggles,’ the office of the PM said in a statement 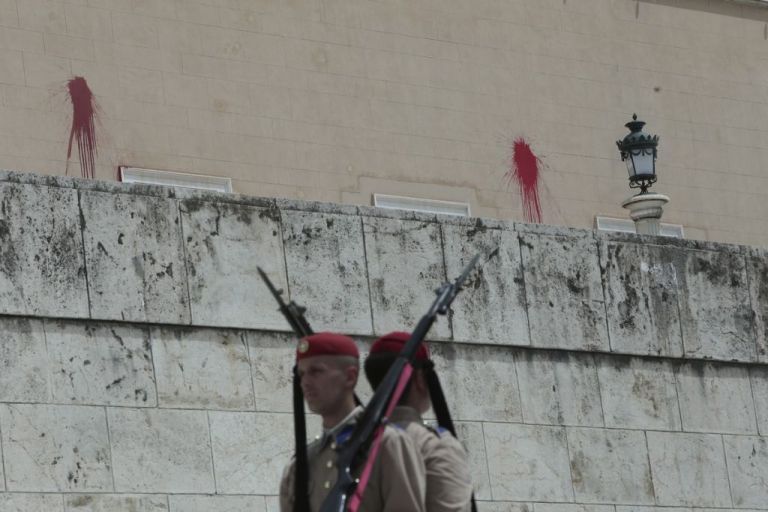 “We condemn without reservation the vandalism of Parliament. Such actions are deeply undemocratic and have nothing to do with social struggles,” the office of the prime minister said in a statement today.

It is the first time Tispras’ office has categorically condemned a Rouvikonas attack.

Voutsis described the culprits as “activists” and characterised their action as “unacceptable and undemocratic”. He said they surprised the police guard as they mounted the stairs on the right side of the Tomb of the Unknown Soldier, right outside Parliament in Syntagma Square, and that they used smoke bombs to camouflage their movement.

“These types of actions against Parliament and any interpretation that sanctifies them are undemocratic and contribute nothing to social struggles which should and do evolve in a different manner,” Voutsis said, noting that such acts aggravate an already tense electoral climate.

The culprits threw bottles filled with red paint on the exterior wall but did not throw flyers or shout slogans as they have during other forays.

The latest foray of the anarchist group was carried out by 30 individuals who threw two smoke bombs and red paint on the exterior of the Parliament building.

One individual was arrested.

Voutsis told journalists that the group was pushed out of the area within 15 seconds.

The attack was carried out in a show of solidarity with the now defunct N17 terrorist group’s operational chief Dimitris Koufoudinas who nearly three weeks ago was denied his seventh furlough by a Volos prosecutor.

Koufodinas, who was convicted for 11 of N17’s murders, is in the 19th day of a hunger strike, and he has been transferred to the ICU of a Volos hospital.

The vandalism of Parliament today – one of dozens of such attacks carried out by anarchists and other Koufodinas supporters over the last weeks – was carried out even as the Supreme Court was poised to rule on prosecutor Xeni Dimitriou’s recommendation that the Volos prosecutor be overruled so that Koufodinas can get his furlough, as long as a Volos judicial council with new members formally approves the furlough.

To Vima’s police reporter Vasilis Lambropoulos had reported days ago, on 13 May an internal Greek Police document regarding “Measures to Protect the Parliament Building” underlined the need to beef up security there given the barrage of attacks against public and private building by anti-authority groups who support Koufodinas.