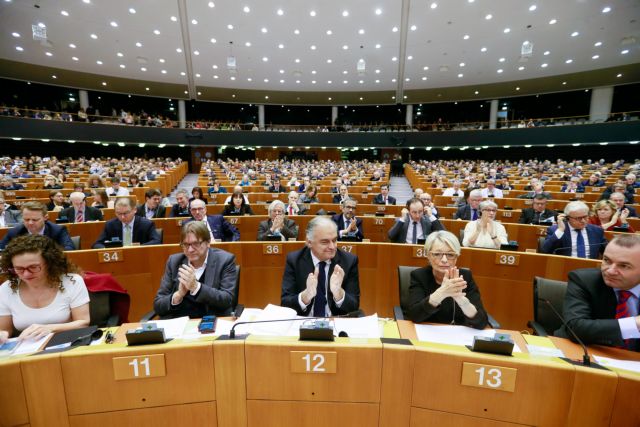 epa07333315 A general view of the hemicycle during a plenary session at the European Parliament in Brussels, Belgium, 31 January 2019. The parliament voted for the official recognition of the President of the National Assembly (Parliament) of Venezuela and self-proclaimed interim President of the country Juan Guaido as president of Venezuela. EPA/STEPHANIE LECOCQ

The survey focuses exclusively on the Europarliament elections and cites data from, among other sources, a poll conducted by Metron Analysis for To Vima and from a Rass survey conducted for the in.gr news site.
New Democracy garnered 36 percent versus SYRIZA’s 24.7 percent.

Three parties that are represented in the Greek Parliament failed to pass the three percent threshold to win an MEP seat. The Centrists’ Union garnered 2.6 percent, To Potami party received 1.5 percent, and the Independent Greeks (SYRIZA’s former junior coalition partner) received only 1.4 percent.

Based on the percentages in the survey, New Democracy would receive nine seats and Syriza would be allotted six seats.

The centre-left Movement for Change, Golden Dawn, and the Greek Communist Party (KKE) would each receive two seats.

The European Parliament’s survey deals with each member-state individually and utilises opinion polls conducted within those countries.

Hence, it is not a regular survey but rather a projection of the results based on data collected from variois sourcces up until 30 January.