Deputy Foreign Minister Terence Kouik is not expected to comply with Kammenos’ demand that he abdicate his right to occupy Papachristopoulos’ seat so that the second runner up can take it. 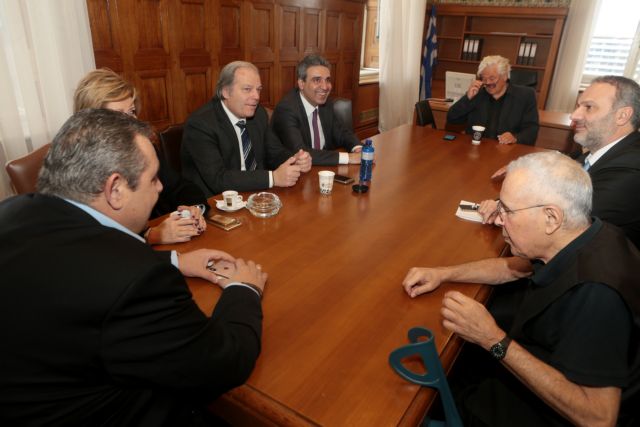 As it stands the rules indicate that a group cannot have fewer than five MPs. Moreover, those five MPs must have been elected on the party’s ticket.

Hence, the expectation is that the council will uphold existing rules after an opposition and media uproar forced the government to scrap its intention of changing the rules to save PM Alexis Tsipras’ former coalition partner.

In a move that was criticised as a blatant violation of the separation of powers, Tsipras after the backlash sent a letter to Parliament Speaker Nikos Voutsis instructing him not to change the rules by even one iota and calling for the question to be put to the competent council.

Kammenos today convened his parliamentary group with MP Thanasis Papachristopoulos in attendance. The party leader gave him an ultimatum that he must either resign his seat before the protocol ratification vote or he will be expelled before the vote.

“I will permit no member of the parliamentary group to execute Macedonia,” Kammenos declared.

Papachristopoulos backed SYRIZA in both the confidence vote and in the ratification of the Greece-FYROM Prespa Agreement, and has repeatedly said he will resign his seat and give it back to the party’s runner-up but he has yet to do so. Now, he says that he will surrender his seat after voting tomorrow to ratify the Nato Protocol on the admission of the newly renamed Republic of North Macedonia to the Alliance.

Indeed, he said that he promised the Parliament Speaker that he will vote to ratify the Nato protocol before resigning his seat.

The problem for Kammenos is that the runner up is the Deputy Foreign Minister for diaspora affairs, Terence Kouik, who has had a falling out with Kammenos and his party and the two are not on speaking terms.

Kouik is not expected to comply with Kammenos’ demand that he abdicate his right to occupy Papachristopoulos’ seat so that the second runner up can take it.

“The Independent Greeks’ parliamentary group convened and we unanimously demanded that Mr. Papachristopoulos surrender his seat to the party as he had promised before the beginning of [tomorrow’s] plenary session of Parliament that will ratify Skopje’s Nato entry,” Kammenos declared.

“The Prime Minister and Mr. Kouik must now assume the responsibility for ratifying this agreement or not ratifying it, and for the enforcement of Mr. Papachristopoulos’ decision not to keep his seat and to return it to the Independent Greeks’ voters. If Mr. Kouik does not do so, he will be responsible for that,” Kammenos said.

As it stands, by all appearances Papachristopoulos will be expelled by the Independent Greeks and Kouik will keep the seat.

By all appearances, the Independent Greeks’ parliamentary group will be dissolved.