“We must be careful because our right to self-determination and our right to use our Macedonian Language is accepted and recognised by Greece,” Zaef said 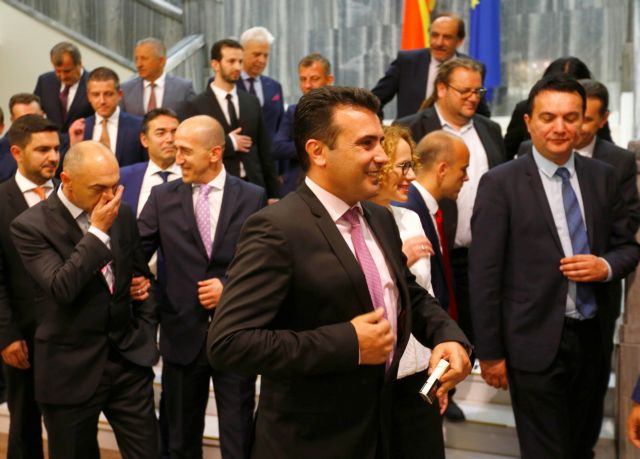 FYROM Prime Minister Zoran Zaev is standing by his statements about the existence of a “Macedonian language” that may in the future be taught n Greece, which have caused a political maelstrom in Greece, and have triggered a stern statement from Bulgaria’s nationalist Defence Minister Krasimir Karakachanov, who called on Skopje to confirm that it has no claims about a “Macedonian language” in Bulgaria.

Asked if his remarks on the language issue are counter-productive as regards implementation of the Prespa Agreement and whether Greece is preparing a protocol to the agreement, Zaev said that there is no such protocol and that he is in “constant contact” with Prime Minister Alexis Tsipras.

“In any event, what is important is that the two sides should be careful with our phraseology. It is a fact that the agreement includes a reference to the Macedonian language and that it belongs to the family of South Slavic languages, and that is something that is accepted and is part of the agreement, as is the fact that we will become the Republic of North Macedonia,” Zaev replied.

In that context, he underlined that the accord provides that FYROM will be entitled to use the “Macedonian” language, although it does not bind Greece to call it that.

“We must be careful because our right to self-determination and our right to use our Macedonian Language is accepted and recognised by Greece,” he said.

Zaev said that friendship and not hostility will be built in the spirit of the Prespa Agreement, and that he believes Tsipras will meet all the commitments in the framework of the accord.

Neither Athens nor Skopje confirmed reports that Greece wants to add under UN auspices a protocol clarifying the correct interpretation of the accord’s provisions on language.

A number of analysts in Greece have linked Zaev’s reference to “Macedonians of the Aegean” and the declaration that Skopje “does not want to annex Greece” to the FYROM PM’s anxiousness about passing the constitutional amendments that are mandated under the agreement.

For its part, the Tsipras government is downplaying Zaev’s pronunciamentos and is focusing on securing the 151 votes needed to ratify the agreement in the Greek Parliament. For this, it will need to attract independent MPs, MPs of the small Potami party, and at least two renegade MPs of the Independent Greeks, Tsipras junior coalition parter, Defence Minister Pano Kammenos, who has vowed to vote down the agreement.