State Minister Alekos Flamboraris [one of the PM’s most trusted advisors], Environment and Energy Minister Yorgos Stathakis, and Deputy Prime Minister and Economy Minister Yannis Dragasakis are believed to be implicated in the affair. 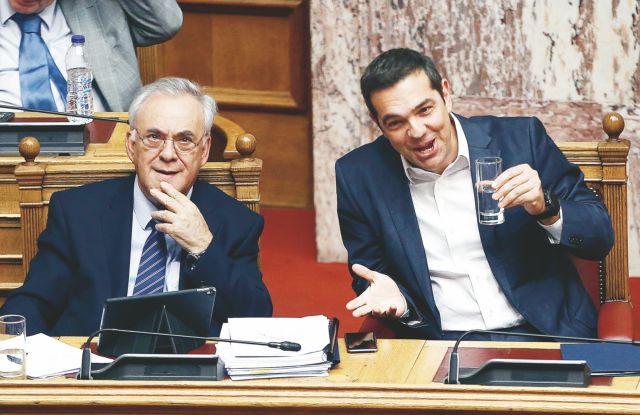 Main opposition New Democracy is demanding that the government offer explanations on how it attempted to exchange for overpriced  properties the huge debts of businessman Lavrentis Lavrentiadis to the Public Gas Corporation of Greece.

Party spokeswoman Maria Spyraki cited articles in the Sunday (26 November) press, and called on the government to make clear if there was a plan to exchange real estate owned by Lavrentiadis, at enormously inflated prices, for Lavrentiadis’ 90mn euros debt to DEPA.

Spyraki said that the emails and minutes that have been published leave no doubt that ministers knew that there was a lien on the properties, but still proceeded to acquire them.

“It has been revealed that [state minister Alekos] Flambouraris became involved in managing DEPA’s debt. As the newspaper Kathimerini revealed, the properties were sold for 8.9mn euros six years ago, and yet they were discussing offsetting 90mn euros in debt with the transfer of those properties. It is necessary for us to have answers,” Spyraki said.

Citing the lead article in To Vima on Sunday, Spyraki said that Tsipras can no longer hide.

“The recent statement of SYRIZA cadre Theodoros Kitsakos [the former head of DEPA who has been charged with breach of fiduciary duty] that his actions were coordinated with top ministers has now been confirmed with incontrovertible evidence,” said the ND spokeswoman.

The minutes of DEPA Board of Directors’ meetings and emails that have been published “indicate that at least three ministers – State Minister Alekos Flamboraris [one of the PM’s most trusted advisors], Environment and Energy Minister Yorgos Stathakis, and Deputy Prime Minister and Economy Minister Yannis Dragasakis – illegally planned an exchange of specific properties at the expense of the state and to the benefits of [Lavrentiadis’] ELFE, even though they knew they were overpriced [ten times the value] and that a lien had been placed on them by the Anti-Money Laundering Authority,” Spyraki said.

“Mr.Tsipras cannot remain silent when 15 individuals face felony charges, including Mr. Kitsakos, who was appointed personally by him to serve the interests of Mr. Lavrentiadis. The involved ministers and the prime minister himself must explain what links them to the businessman who is on trial,” she said.