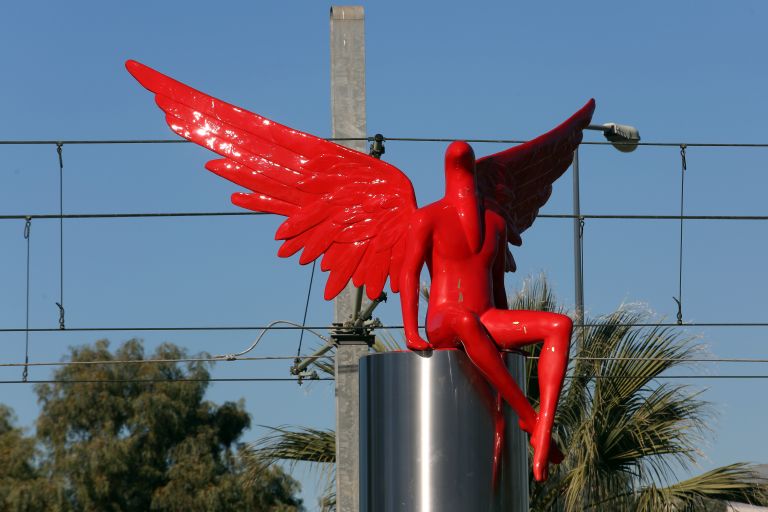 A statue of a red angel with wings spread and perched upon the column, the work of internationally renowned painter and sculptor Kostis Georgiou, was toppled by fascist Golden Dawn members, as Palaio Faliro Dionysis Hatzidakis claimed.

The mayor said that a group of about 15 hooded individuals toppled the statue, which the sculptor has named Phylax, or protector, and then fled by automobile. Before leaving, they threatened the owners of an adjacent kiosk and a canteen.

“At about 3:30am, with a huge truck and two jeeps, the hooded culprits threw ropes around the statue and pulled it to the ground, breaking its wings. This is a deep state-type attack.They threatened the person at the canteen that if he alerted the police or the mayor, then they would burn down his canteen. The moment he alerted me he went to see, but they had removed their license plates. This is a Dark Ages mentality in all its splendour,” the mayor said.

“This type of vandalism is paramilitary style, because when you wear hoods and remove license plates, this is what it is. If you like and you’re such a tough guy, come to City Hall and tell me to take it down because I will break it – don’t do it secretly. I know who commits these sorts of macho acts. I have indications that they are Golden Dawn members,” Hatzidakis said, without offering evidence to substantiate the charge against members of the fascist party.

Demons, exorcism and the bishop

The sculpture stirred controversy from the time it was installed at the entry to Palaio Faliro, as small groups of Orthodox Christian zealots saw the red sculpture with a human body and a bird-like as a demonic presence, and demanded that it be removed.

In a letter to the mayor on 10 January, Metropolitan bishop Symeon of Nea Smyrni demanded that the sculpture be relocated. He declared that the design and colour are not reminiscent of religious or secular depictions of angels, and he chastised the mayor for saying that the sculpture would be the protector – Phylax – of the city.

Symeon said that it was the location that bothered him especially, as it was erected near two popular Greek Orthodox churches, and close to a moment to the Apostle Paul.

Earlier this month, a priest and a small group of his followers conducted a blessing of the waters near the sculpture, in an apparent effort to exorcise any demons that might be within.

The sculptor has from the start expressed his amazement and disgust over the violent reactions of small groups, likening their behavior and stance to a medieval mentality.

“This is not simply vandalism. It is an offense to the human dignity of the individual. My view is that the place of the sculpture is exactly where it was determined from the start that it will be erected,” Georgiou said, hinting that he will repair his sculpture so that it may be returned to its proper place.